A story in yesterday’s Toronto Star about the sale of an “abandoned, decrepit mansion” in Scarborough prompted me to think about an interesting category of ruins: Buildings that were abandoned before they were completed.  The home in Scarborough is a 12,900 square foot structure that was abandoned over a decade ago after a bankruptcy.   The photo with the article gives no real clue to the size of this place, but a screen grab from Google Earth does: 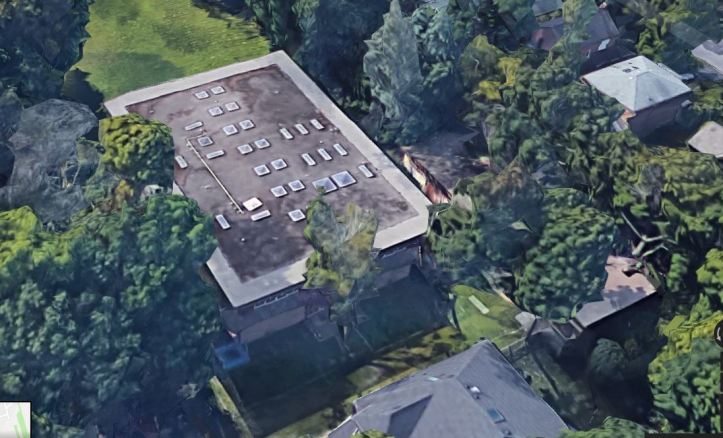 “It’s built like a giant Shoppers’ Drug Mart,” the real estate agent for the sale stated, and this photo seems to bear it out.  It looks like ample skylighting was intended as a solution for possible lack of light in interior rooms.

This particular ruin, given its location and the apparent solidity of the structure, will probably eventually be finished.  That’s not always the case for structures that for whatever reason were halted mid-construction.

In Toronto, one of the most famous was a building known as the Bayview Ghost.

Developers purchased land in the Don Valley in 1953 for a future development, but some of it was appropriated to build the Don Valley Parkway.   Developers planned to build eleven apartment buildings on the land and obtained a permit to begin building the first two seven-story structures of what were to be called the Hampton Court Apartments in 1959.  But nearby residents had not been consulted when the land was rezoned for apartments, nor had any provision been made for sewer services.  After public outcry, the building permit was revoked–leaving the shell of a seven-story apartment block on the site that stood for over 20 years as various parties wrangled over the future of the site.  Eventually, the decision was made to build detached homes on the property and the Ghost was torn down in 1981, but the site was not actually developed until over 20 more years while right-of-way access was arranged.

The story was big enough to attract notice in the New York Times.  Former East York Mayor Alan Redway has written about the saga as well.This site shows where the building was located in relation to the homes that now stand on the property.

When I began working at the Canada Permanent building at Bay and Adelaide in Toronto in 2006, I had an excellent view of another unfinished ruin:  the so-called “Stump”–the unfinished elevator tower of what was originally planned to be a 57-story office building on the northeast corner of Bay and Adelaide streets.

Downtown Toronto in the 80s was still in a building boom, so when developers proposed this huge building (taller than the city plan had actually allowed) there were few impediments raised, other than the developers making some concessions for parkland and social housing because of the height variance required.  A parking garage was completed and the elevator shaft of the new building began to rise.  But then the Toronto real estate bubble crashed as recession hit.  With vacancy rates in nearby towers at nearly 20%, the project was put on permanent hold, leaving the Stump as the only above-ground evidence of the planned project.

When I started working in the area in 2006, the Stump was being used mostly as a huge billboard.  But this changed soon thereafter.  Toronto’s downtown was once again booming, and a new development – the Bay Adelaide Centre – was slated to be built on the property.  It would retain the parking garage, but the Stump was doomed. I watched as wreckers smashed it into oblivion. In contrast, two older buildings that fronted Bay Street were were taken down floor by floor (one of which’s facade has been retained in the new building).

You can read about the Stump in this article, which also contains an image of what the original planned tower would have looked like. This Spacing article talks about both the Stump and the Bayview Ghost, along with a couple of other incomplete or partially-completed skyscrapers.  The Bay Adelaide Centre today has two towers (with a third planned), although neither has the precise footprint originally planned in 1987.