I am a chick that likes cars.  I come by it honestly.  My mom worked for GM; she started during WWII as a “bookkeeper” and didn’t stop working there until my birth. As a kid, I had lots of Hot Wheels and Matchbox cars, and a bunch of that orange track to race them on.  I built a few model cars, too. My favourite cartoon as a kid was Speed Racer. And my first car was a 1980 dark red Pontiac Firebird.  It was the V6 version and lacked the “screaming chicken” decal on the hood, but it was still a pretty awesome-looking car for a high-school senior, even if it had a minuscule trunk and burnt oil.  It eventually caught on fire, and I moved to a much more practical Nissan Sentra, which was not red but did have a manual transmission.  I have never since owned an automatic.

Back when I had the Firebird, I used to drive all over Columbus, a couple of friends in the passenger seat and crammed in the back, and I’d crank up Rush (Red Barchetta, of course) and Peter Gabriel and sometimes a little Beethoven (just to mess with people) and we’d talk about life and that kind of thing. Later in my OSU years, I made my first road trips and reconfirmed that I loved driving just for driving’s sake.  A good thing, too, because I did a lot of it after I moved to Canada, between trips back to Columbus and SCA events.  I still don’t mind a six or seven-hour road trip, provided I have good music or good company or both.

So it shouldn’t be surprising that I’ve been attending the Canadian International AutoShow for a few years now every February. (We even went to the one in Detroit a couple of times).  In recent years, we’ve cared less about the new car releases (nothing’s really blown me away since the Jaguar F-Type and the C7 Corvette) than about the AutoExotica displays and whatever unusual stuff they can dig out.

This year, there was this:

This Bugatti Chiron is made entirely of LEGO Technic, no glue involved–over a million pieces.  Even the engine is made of LEGO–specifically, 2,300 individual Lego Power engines. It’s rated at 5.3 hp and has a top speed of  18 kph – just a wee bit different than the real thing’s top speed of 420 kph.  But it runs, and is in all other respects a replica of the original.

For the last decade or so, there has been a Concours d’Elegance at Cobble Beach, up near Midland. I’ve attended a couple of years. A Concours is a very high-end competition for automobiles of historical merit, beautifully restored. The cars you see at a Concours are works of art.  They have had a display at the auto show the last three years.  Being me, it’s the cars of the late 20s-40s that catch my eye—the Deco and Moderne-styled cars.  This year, they had this rather astounding ‘37 Cadillac: 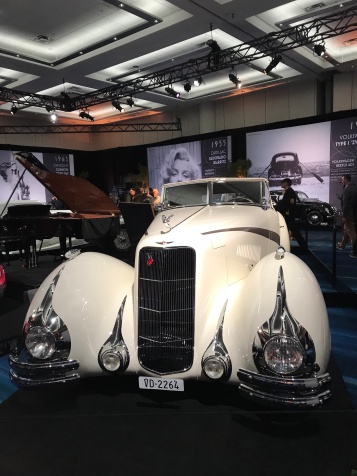 This thing is enormous and terribly, terribly sexy, and leads credence to my belief that 1937 was the best year for gorgeous cars.

There was also this 1938 Buick Y-Job concept car:

The interesting thing about it is how much it reminds me of a 50s car. This is where automobiles were headed when WWII interrupted and halted auto production.

Speaking of the 50s, here is a Delahaye.  This is a French marque, makers of some of those beautiful 30s cars I mentioned, but it survived past the war and made some pretty swizz stuff. 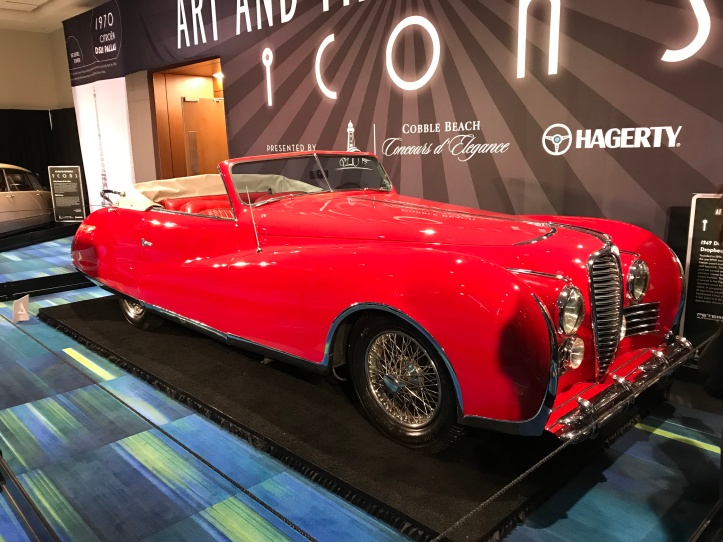 The French marque Delage was also represented with this 1933 example:

On a completely different note, the Ontario Regiment Museum was also there, with assorted tanks and military vehicles.

I would be remiss if I did not share a couple of the exotic cars.  This one is a Devel, and has a 5000 hp engine.

Here are a couple of McLarens.

And one of the few regular cars I took a photo of, the latest MX-5.  This photo does not do this shade of red, called “Soul Red”, justice. 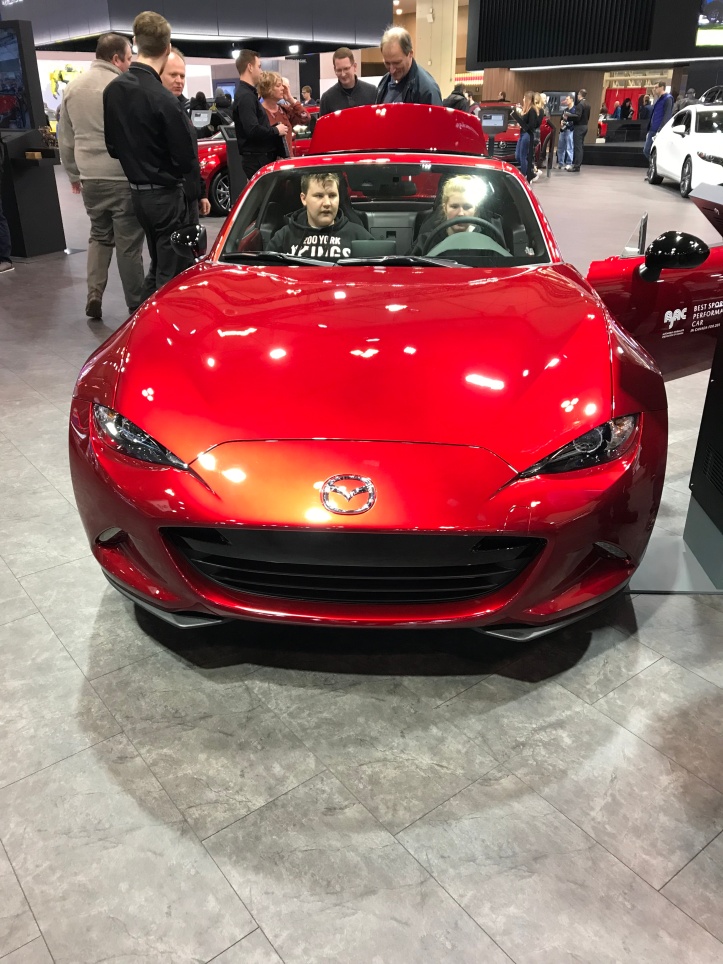 If we didn’t have a Porsche, we’d totally get another one of these.

But increasingly, the cars I love are from a “better, vanished time”, to quote “Red Barchetta.”  Even the LEGO car speaks to me of a time, more than 40 years ago, when I constructed crude cars out of classic LEGO blocks.  I suspect I’m not alone. In this era when self-driving cars are a reality,  the cars of our past are icons of their eras–some works of art, some symbols of our youth, and of freedom.

This world is receding in our rear view mirrors.

My uncle has a country place
That no one knows about
He says it used to be a farm
Before the Motor Law
And on Sundays I elude the eyes
And hop the Turbine Freight
To far outside the Wire
Where my white-haired uncle waits
Jump to the ground
As the Turbo slows to cross the borderline
Run like the wind
As excitement shivers up and down my spine
Down in his barn
My uncle preserved for me an old machine
For fifty odd years
To keep it as new has been his dearest dream
I strip away the old debris
That hides a shining car
A brilliant red Barchetta
From a better vanished time
I fire up the willing engine
Responding with a roar
Tires spitting gravel
I commit my weekly crime…
(Rush, “Red Barchetta.” Lyrics by Neil Peart).