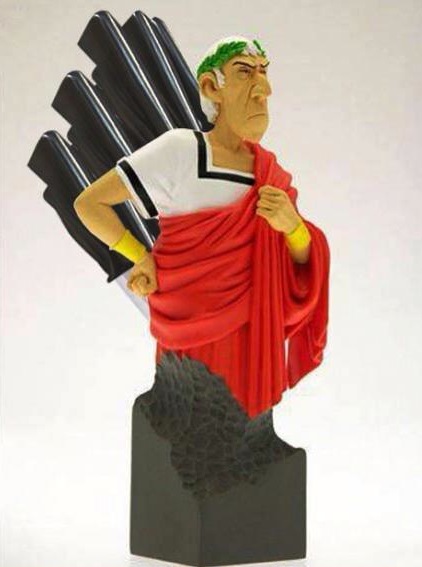 After yesterday’s feast on π, today we have reached the Ides of March, best known as the day Julius Caesar was assassinated on the steps of the Senate in 44 BC.  (You can call it Salad Day if you like–after all of that pie from yesterday, you probably want a healthy option.)

Caesar is the pivot upon which the end of the Roman Republic and the birth of the Empire turns.  For those who do not know the story:  The Roman Republic was founded in 509 BC.  Rome was, a the time, one of many small kingdoms in Italy; gradually, over the years, Rome conquered all of Italy and then began to spread out beyond.  Most significantly for this discussion was its form of government.  Rome was governed by the Senate, a legislative assembly, and by a system of elected magistrates. A Roman desiring a political career would progress up the cursus honorum of offices,culminating in the office of consul, held jointly between two men for one year.  Consuls ruled as head of the Senate while in Rome, and while abroad usually commanded armies.  In its last century, this form of government began to break down. Some consuls served repeat terms, and in other cases political power began to be wielded outside of the traditional structures of the Republic.

Starting in 60 BC, political power was concentrated in three men:  Caesar, Pompey, and Crassus. Caesar headed the faction dubbed the populares (populists) and was a military commander of great capability. Pompey was associated with the optimates (literally, “best ones” –the traditional aristocracy).  Crassus was the richest man in Rome.  Together, the three allied to leverage popular support against the Senate.  Caesar served as consul in 59 BC, and then was appointed Governor, as was traditional, giving him command over four legions in Gaul and Illyricum.  He was able to use this commend to conquer the rest of Gaul, pushing into Britain. His great successes, along with the death of Crassus in 53 BC, essentially broke down the triumvirate,  Pompey and the Senate demanded that he disband his army and return to Rome, and in response Caesar crossed the Rubicon in 49 BC along with one legion.  The Rubicon was the border of Italy, and by crossing it with a legion, Caesar was marching on Rome, igniting civil war.  Caesar defeated Pompey in 48 BC.

The Senate had always been able to appoint a dictator in times of trouble–essentially, an emergency head of the government whose powers while in office were unlimited.  Caesar was appointed dictator in 48 BC in order to deal both internal and external enemies.  In 46 BC, his term as dictator was extended to ten years, and just a month before his assassination, he was appointed dictator in perpetuity.  He also had been granted powers of some of the other magisterial offices, and had undertaken sweeping reforms–including consolidation of provincial governments and granting himself the right to appoint consuls and other magistrates, rather than electing them.  These changes set the stage for the Roman Empire…but not before Caesar himself was assassinated and Octavian, who had been adopted as his heir, survived another period of civil war to emerge as Augustus, the first Roman Emperor.

This is where the story of the Ides themselves intersect with Caesar’s story.  One of Caesar’s main reforms was to the Roman calendar.  The old Roman calendar was a lunar one–the kalends (or first day) represented the first sighting of the new moon, the nones represented the first quarter, and the ides represented the full moon and were sacred to Jupiter.  The nones were the ninth day before the ides (the Romans counted inclusively, so it’s actually 8 days in our way of counting) and the ides the day before the middle of the month.  There were just ten months of set length, starting in March, and whether the ides fell on the thirteenth or the fifteenth day depended on whether the month was 30 or 31 days.  January and February were the two additional “winter” months.  To keep the calendar more or less in sync with the solar year,  in some years an extra month was inserted after February to “catch up” the calendar. This can make for wildly different year lengths in the pre-Julian period, depending on whether an extra month was inserted or not after February in a particular year.

Caesar introduced the Julian calendar (based on the Egyptian solar calendar), which is essentially the modern calendar (with a few minor tweaks introduced in the 16th century as part of the Gregorian reforms), which allowed the calendar to be used for agriculture.  To get the dates synced up again in 46 BC three extra months were added – one after February and two after November.  Starting on January 1, 45 BC, the new calendar was in force.  The Julian calendar also introduced the leap day every four years.  Rather than adding on February 29, as we do now, the Romans repeated the 24th of February.  To understand why it was considered the “bisextile day” (dies bisextilis), we have to return to the traditional division of the calendar, which did not end with the introduction of the Julian calendar.

As noted above, Romans reckoned their dates as days before the next milestone date (kalends, nones, or ides), counting inclusively. Months were either full (31 days) or hollow (anything less than 30 days–usually 29 days, in sync with the moon, with the quarterly 31-day months meant to make up for the fact that the lunar cycle is actually 29.5 days).  Originally, only March, May, Quintilis (later renamed July in honour of Caesar) and October were full months. The kalends were always the first day.  The ides were the 13th day in hollow months and the 15th day in full ones–one day before the “middle of the month” counting inclusively. The nones counted back nine days inclusively from the ides, placing it on the fifth day in hollow months and the seventh in full months.   The Julian reforms lengthened all months to either 30 or 31 days, with the exception of February.

To use Roman dating, you count backwards from the last milestone day.  My birthday, March 5, would be ante diem III nonas Martias (or a.d. III non. mart.) using this system.  The nones of March are March 7, so counting back inclusively to March 5 results in three days.  In February, in leap years the leap day was inserted at a.d. VI kal. mart. – which is February 24. The understanding was that that day was actually repeated, so not as to confuse the numbering back from the kalends. Since it’s the sixth day before the kalends, the term “bisextile” (dies bisextilis) was used to refer to it.   This term is sometimes used to refer to leap year and leap day, even though we no longer insert the extra day around February 24.

So today, when you drink a bloody Caesar, eat a Caesar salad, or catalogur your knife drawer, remember the man who established the calendar we still (more or less) use today, and be glad that those reforms did not die on the steps of the Senate along with Caesar himself.  And maybe, for a spot of fun, you can figure out what your birthday is using Roman dating.