When we walk through a modern city, we often see layers of the past in the buildings that line its streets.  But what lies beneath those streets, buried, beyond our gaze?

When I visited Montreal last week, I had only one day to enjoy the city before the concert I planned to attend in the evening. This was a different city, at least on the surface, than the one I had seen as a child in 1976, just after the Olympics. When I visited then, what I wanted to see were the Olympics venues, along with taking a horse-drawn carriage ride up Mont Royal.  I was not particularly interested in architecture or archaeology or history at that point, so I don’t recall ever visiting Old Town Montreal, the area I chose to focus on for my visit.  This time, I wanted to wander through its streets, with their European feel, to visit the gorgeous 19th century basilica I had seen in photographs (and perhaps the Art Deco skyscraper I’d spotted across the street), to tour Chateau Ramezay, one of the city’s oldest homes, and to see the archaeology and history museum, which I learned was called Pointe-à-Callière, a name that until last week meant nothing to me.

I did all of these things during a visit of about six hours’ length, but it was the last of these–my first stop–that revealed the layers below.  This museum, opened in 1992 in time for Montreal’s 350th anniversary, is astounding, not least because of how quickly it was built.  I was expecting the rather typical archaeological museum I’d seen before –artifacts, perhaps maps, perhaps dioramas or scenes from history.  I knew that this could be no Louisbourg, where the entire site was abandoned for centuries before being rebuilt.  Montreal had never been abandoned and is now a thriving, modern city.

What I did not know was that when I entered the museum, I was stepping into the midst of an archaeological dig, preserved for visitors to view.  The excavations had begun in Place Royale, once a “town square” for the city, in 1980, and then had continued at the nearby Pointe-à-Callière in 1989.  Pointe-à-Callière was the name for the point of land where the Little St. Pierre River met the St. Lawrence.  I say “met”, as the river has now disappeared–subsumed into underground sewers.  It was on this precise site that the fort of Ville-Marie was built by Champlain.  It takes its name from the third governor of Montreal, Louis-Hector de Callière, whose home was built on the same site.  It was only a year after this latter set of excavations began that the idea of building a museum focusing on them in time for Montreal’s 350th anniversary was first brought forward.  The museum would come to enfold all of the archaeological excavations as well as the old Customs House building.   A design for the above-ground museum was chosen (dubbed the Éperon) which took a novel approach:  To preserve all of those excavations in situ by situating the new building on piles above them. All of the layers unearthed–dating from the period before European contact all the way through the 19th century–would form an archaeological crypt that visitors could walk through, but in this case, the remains would be the traces of a living city that had continued to evolve.    All of the architectural remains were temporarily reburied in sand to protect them while building commenced in 1991.  And in 1992, the museum was completed and opened to the public.

The results are stunning.  Upon entering, at the tip of Pointe-à-Callière itself, I descended down beneath where a park and before that, a parking lot had once been located to the remains of the Royal Insurance Company building, where I could clearly see the walls of its tower.  Down lower, the remains of houses (the Berthelet and Papineau houses) to where fragments of wood were found from the first structures built by Europeans along the shore.  Nearby, an arch from the first containment sewer that enclosed the buried Little St. Pierre River, and a little farther beyond, remains of the first Catholic cemetery. Throughout this area, various objects unearthed in the excavation helped to illustrate the story of each era, including that before Europeans first arrived. 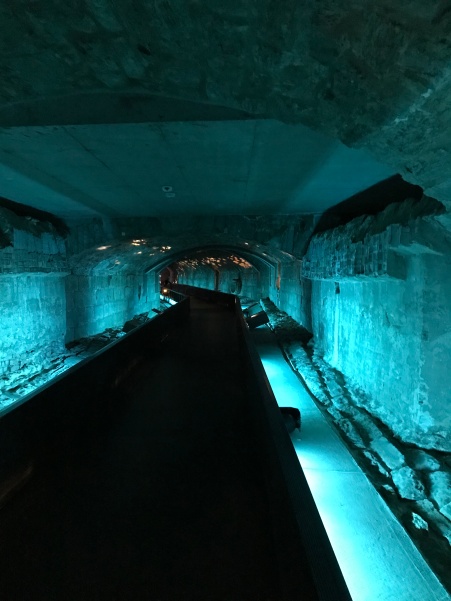 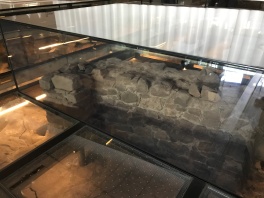 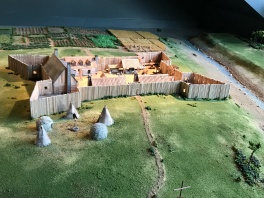 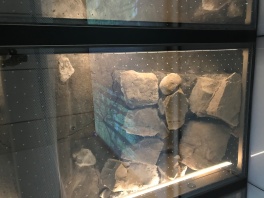 A long stretch of that early sewer, lit in shades of blue to evoke the water that once flowed there, took me down to the site of the fort of Ville-Marie itself, the first European settlement.  A model placed right by a window at grade level above my head showed how this fort lay in relation to the river, which had been diverted into the sewer I had just come through underneath the street I could see through the window.  If I turned to my left, I could walk on glass floors directly above the remains of that first fort and see post holes from its stockade.  A little higher up, I could see the remains of Callière’s house, which was built later as Montreal was transformed from fort to town. 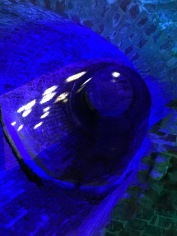 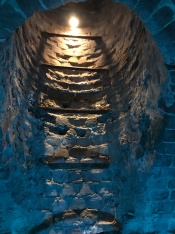 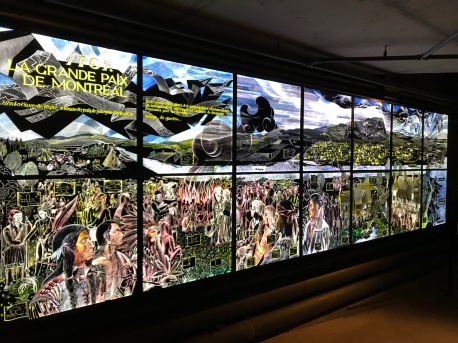 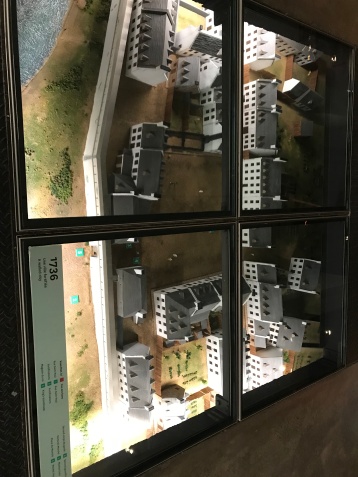 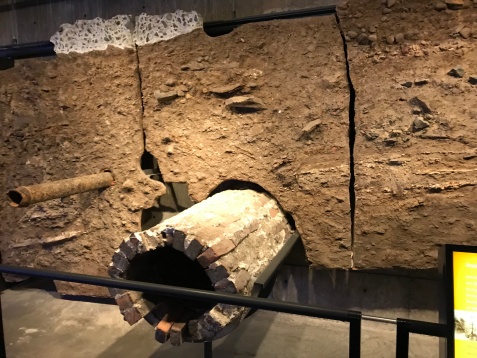 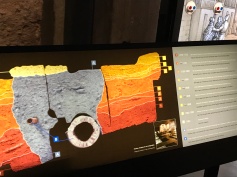 Back down the sewer tunnel and off to the left, I entered the site of the Place Royale.  Layered on top of each other here were foundations and remnants from four periods, starting with the remains of First Nations fires, through growth under the French and then the English, and finally as a Canadian city.  Dioramas, displays of artifacts, and multimedia displays help bring these foundations to life, but the most brilliant display were the layers themselves.  Here, you stood in the midst of the excavations, and followed along as lights illuminated to pick out first a First Nations fire pit, then the walls of stockades and barracks, then, later, the buildings of tradespeople and the remains of a tavern.  You could see clearly how, as time passed, the new was built directly on top of the foundations of the old, the elevation of the ground rising a little each time and erasing the remnants of previous iterations–leaving them for archaeologists to rediscover and interpret years later. 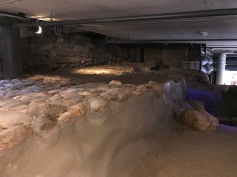 Finally, through a door I found I was in the basement of the customs house, which was configured to show how it might have looked in its heyday.  Up the stairs and into the main floor there was an entertaining display about pirates and corsairs. 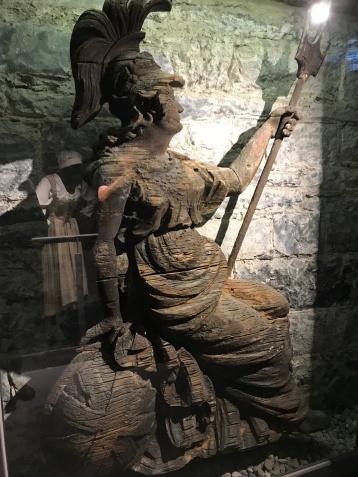 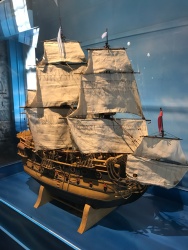 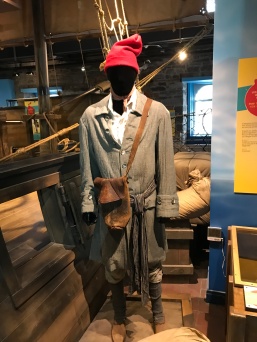 I’ve provided photographs as best I can, but they do a poor job of conveying the sense of deep connection with over 350 years history I experienced while walking among these long-buried foundations.  I’ve never seen anything quite like this place (the closest I can remember is an excavation of Roman walls beneath a building in London).  It succeeds brilliantly.  The treasures found in these crypts are not precious jewels, but rough stones, remnants of pipes, and darkened dirt, along with fragments of daily life once dropped, then buried for many years.  But they are absolutely rare and unique, and moved me in a way no other museum ever has.  The architectural remnants, incomplete as they are as the buildings that once stood above them were gradually torn down and built upon, layer upon layer, speak volumes to the way a living city evolves over time, raising questions and wonder about what might lay underneath our own feet, wherever we might be.

(Visit the museum’s website for more photos and details.)