Montreal Layers: The Place d’Armes (and the Place des Arts)

I wrote about Montreal’s original public square, the Place Royale, in my piece about Pointe-a-Calliere a few days ago.  The heart of Old Town Montreal is now the Place d’Armes, a few blocks away. When I arrived there on a superb September day, the fountain at its centre sparkled in the sunlight as musicians played “La vie en rose”, lending an air of Paris to the space, surrounded by buildings from just about every era in the city’s history.

The Place d’Armes also has a long history as a public square, beginning its life as the Place de la Fabrique, originally at behest of the Sulpicians, the religious order that played a significant part in the development of Montreal, in 1693.  The name was changed to the current one in 1721 when it became an assembly point for the military.  Over the years, it has served as a hay and wood market, and then as a Victorian-style garden after the city acquired it in 1836.

This acquisition was tied into the completion (at least of the main structure) of the first building to give the Place d’Armes we see today its shape:  Notre-Dame de Montreal Basilica.  This spectacular church has a unique history that is reflected in its stained-glass windows, as we shall see.  It replaced an earlier church that the city had outgrown, and fundraising for it was largely accomplished by Montreal businessmen.  In 1824, the committee hired architect James O’Donnell, a Protestant.  O’Donnell would die before the building was completed, after converting to Catholicism (allowing him to be buried at the site).

The basilica (a designation it’s held since 1982, incidentally) was the first large Gothic Revival church in Canada.   Construction of the main structure took place from 1824-1829, with the towers and bells completed in 1848.  The main structure features 1.5 – metre thick walls.  Sixteen massive tree trunks were provisioned for the columns of the nave (which were replaced in 1962 by concrete due to dry rot).  Frescos and an altarpiece were part of the original design as well.  However, the interior design of the church was substantially changed from 1872-1880, with the addition of the current altarpiece and redesign of the windows.  The original windows (which did not have stained glass) were insufficient to illuminate the interior, with the exception of a massive window behind the altar where the light would stream directly in, blinding worshippers. The new altarpiece fixed this issue, and skylights were added to the roof to increase the lighting to the interior.  Another addition during this period was the spectacular pulpit, which was completed in 1887.  An immense Casavent organ was added in 1891; today it has over 7,000 pipes. 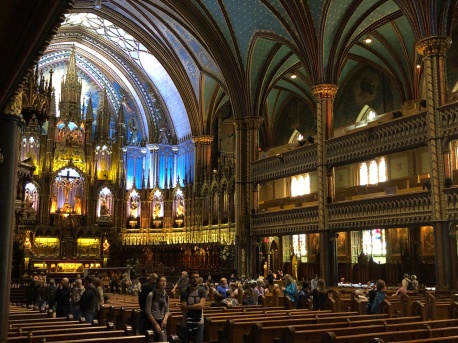 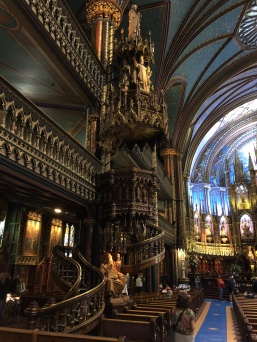 The gorgeous stained-glass windows are a highlight of the church, but have actually been in place less than 100 years.  Instead of the usual subjects depicting various saints, these windows, completed in 1931, depict the history of Montreal (specifically, its religious history, which is intimately wrapped up in its secular history).   The most recent major section was the redesign of the Sacred Heart Chapel, which was destroyed by a fire in 1978.  The rebuild, completed in 1982, is in a modern style and features a massive bronze altarpiece.  The chapel has its own organ with over 1600 pipes. 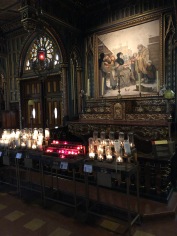 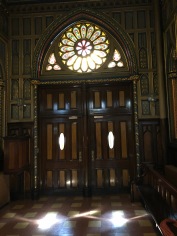 Notre-Dame de Montreal is known world-wide as one of the finest expressions of the Romantic ethos of the nineteenth century.  Its lush, dramatic interior, dominated by jewel tones and rich woods, seems to glow from within, augmented by the glow of candles at its various chapels.  It is a spectacular space, even for a confirmed agnostic like me.

Emerging from the dramatic, rich environment within to the sunlight outside, I turned my gaze to the Art Deco skyscraper caddy-corner from the basilica.  This was the Aldred Building (or, in French, Édifice Aldred – since Deco was born in France, perhaps more appropriate), a 23-storey structure completed in 1931.  Apparently, since the corner it stands on is not quite square, the lower storeys are not quite face-on to the Place d’Armes, although the upper storeys are. It was built for a New York-based financial company, and like its exact contemporary, the Empire State Building, features a series of setbacks at the 8th, 13th, and 16th floors, which also serve to recall the nearby church.  The setbacks and its location on the Place d’Armes allowed it to bypass height restrictions then in force in Montreal which normally would have limited it to 12 floors. The main exterior construction material is Indiana Limestone, with a steel frame and bronze and stainless steel ornamentation.

Like many Art Deco buildings, the lobby is spectacular, decorated in marble of several hues, dramatic light fixtures, and polished brass elevator doors.  There is also a dramatic lighted mural of art glass at the intersection of the two wings of the building. 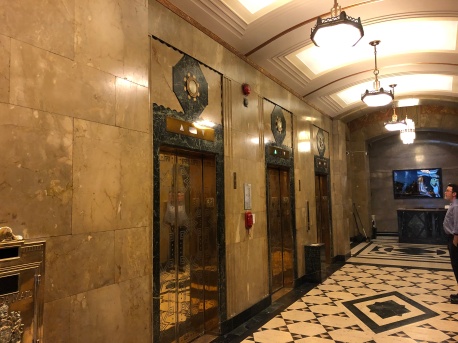 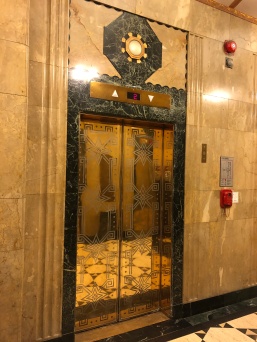 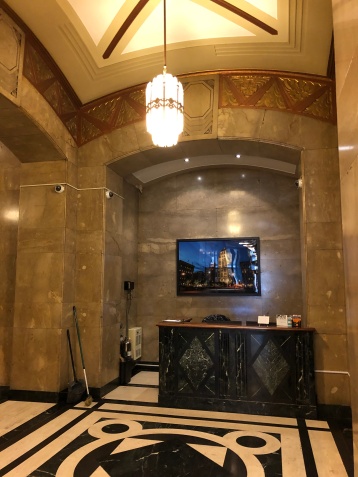 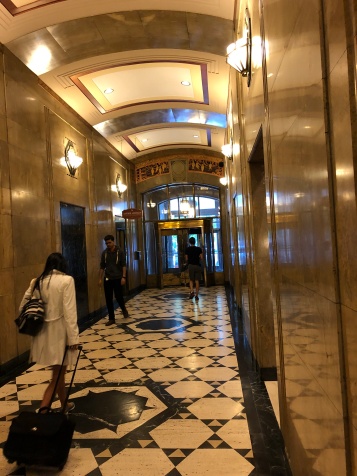 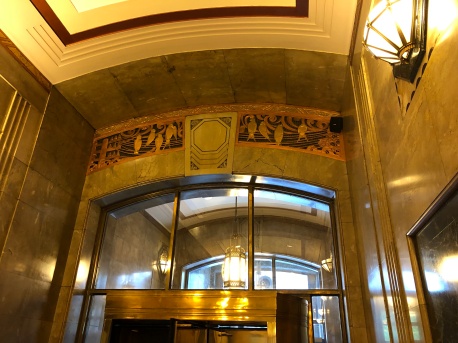 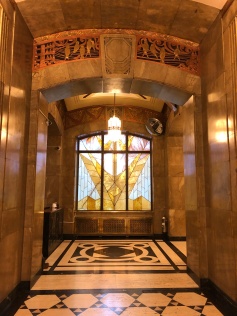 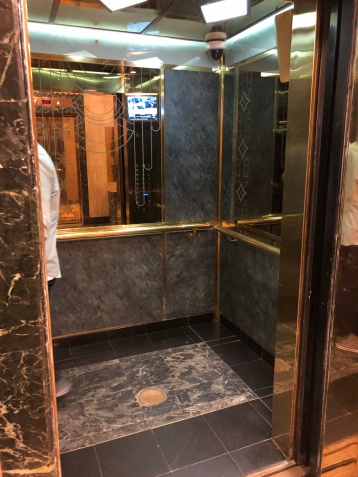 As I left the Place d’Armes, I noticed klezmer music had replaced the French art songs of earlier in the day, just reinforcing the worldly European ambiance of the place. Hopefully I will get to explore some of the other buildings on a future trip, including the Romanesque skyscraper beside the Aldred Building and the domed BMO building across the square.

Later in the evening, I found myself in a more modern public square, the Place des Arts, which is the largest performing arts complex in Canada.  The Montreal Symphony’s Maison Symphonique (also the home of several other ensembles) is just one of the more recent additions to the Place des Arts, which is also home to  Les Grands Ballets Canadiens and the Opéra de Montréal, as well as the Musée d’art contemporain de Montréal and an outdoor stage for performances, including the famous Montreal Jazz Festival.  There are also smaller recital halls and practice spaces, and everything is connected by an underground mall.

The Place d’Arts, which is in the midst of a busy part of downtown Montreal, also had an appealing, energetic vibe to it, much like its older cousin a few blocks away.  Montreal clearly continues to evolve through its use of public spaces and the buildings that surround them.  These are the places that make a city special, and even within the space of just a few hours, I think I got a taste of what makes Montreal unique.