When we lost Eleanor, one of our tabby sisters, a month ago, I knew that eventually, when the time was right, another cat would find me.

In recent years, this is how cats have come to us. Spitfire we found while cutting through a pet store on the way to pick up clothing we’d have altered; she got her name because it was Remembrance Day. Eleanor and Victoria, acquired at age 2 1/2 weeks from their feral mother (who we eventually ended up taking in as well).  Eowyn just wandered onto my mother-in-law’s property, tripping the motion-sensitive light. Orlando was part of a pile of orange barn cats one Christmas. And so on.

I’m currently working on helping out the Niagara Falls Humane Society with their medieval-themed fundraising gala. This is the brainchild of Gillian/Runa, who made the initial visit to the shelter and told me about the kitties there.  “Keep an eye out for me,” I said.  “I have a slot open.”

Last Saturday, the Humane Society brought out four kittens and a puppy to the SCA event so they could get a few pictures of us in our medieval clothing with adorable puppies and kittens.  I came inside from shooting archery and immediately squeed at the cute.  In particular, there was one kitten who caught my eye—the first one I got to hold.  This kitten was chill.  She was snuggling right into to the arms of anyone who held her.  Unlike the little white and black kitty, who was absolutely trembling in fear (and later took a dump on Sir Gann, to his great amusement), or the other tabby, who was squirmy, or the little black fuzzball who had disappeared into Alex’s kimono (and Alex wasn’t letting him/her escape), this cat knew how to work a crowd of cat-crazy medievalists.  And she was missing one of her front legs.

After throwing some knives and axes and chatting with a few folks, I returned to where the kittens were to get my picture taken with one. I was reunited with the chill kitty, who proceeded to fall asleep right in my arms.  Apparently this kitten had completely charmed Runa as well, and she dropped hints that I should consider adopting her (as she was unable to). 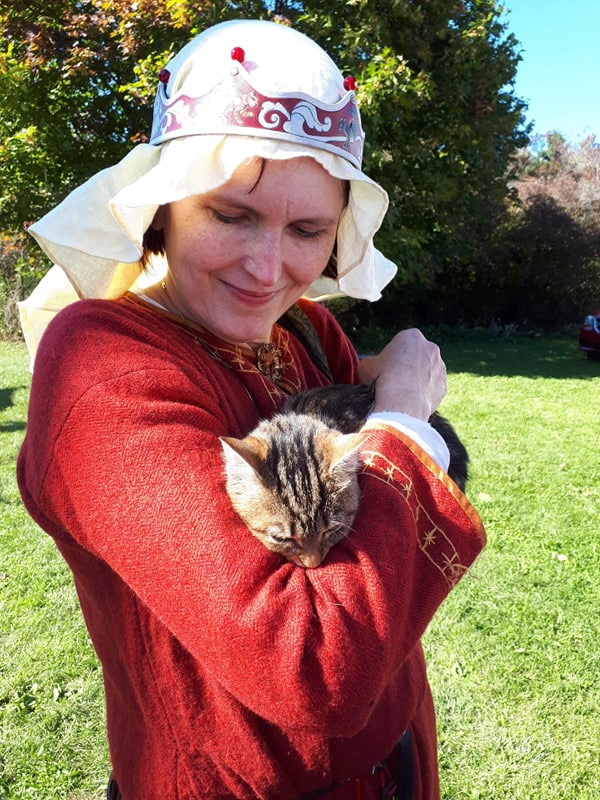 Well.  That idea planted itself in my brain.  I gave my husband a look. “We’ll have to talk about it,” he said.

It really didn’t take much.  I asked the Humane Society folks a few questions about why the kitten had lost her leg (she was a stray, and it was injured when she came into the shelter) and took a card with their contact info.  I Googled for info on three-legged cats. We talked about it again when we got home.  “I think I have a name for her,” said Dave. “Furiosa.”

When he starts naming the cats, I know he’s sold. Dave’s a cat guy, and even though he hadn’t gotten to hold her, he’d seen how she was with me.

I phoned that night.  And then waited. The shelter was closed on Sundays, and didn’t open until 10 am Monday.  Since I work from home on Mondays, going down to Welland was doable.  I phoned them again Monday, and we went down that afternoon and filled out the application to adopt.

We didn’t get to pick her up until yesterday, however.  The vet decided she was healed enough from her amputation to go ahead with her spay on Wednesday.  This meant we would not have to make a return trip to Welland to get that done later.   Along with her, we also got her complete history.  She came in to the shelter as a stray, malnourished, with what was termed a “degloving” injury to her right front paw, probably from it being crushed under something.  At first, hopes were that it would prove mild, but although it seemed to be healing well enough, she was not putting weight on it nor did she seem to have feeling in it, so the decision was made to amputate.  She had had the surgery just six days before I met her. 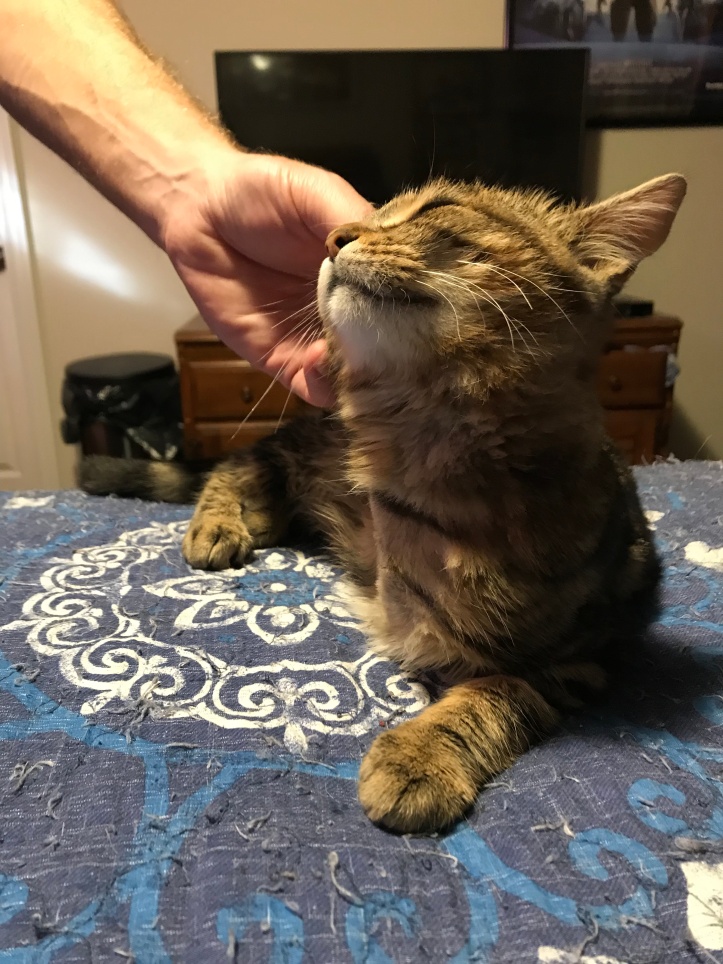 We’ve now had Furiosa for just over a day, and I’m not sure she’s stopped purring–an astoundingly loud purr for such a small kitten.  She’s definitely still recovering from the trauma she suffered, and missing her kitten friends who she snuggled with in the shelter.  Our cats haven’t quite warmed to her yet–Victoria is avoiding her altogether and Spitfire is still growling and hissing a bit – but is now joining us on the bed where we have had her most of the time.  So she’s settling for the big hairless cats. 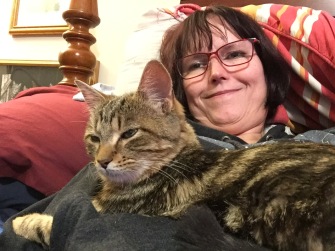 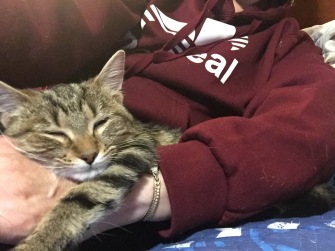 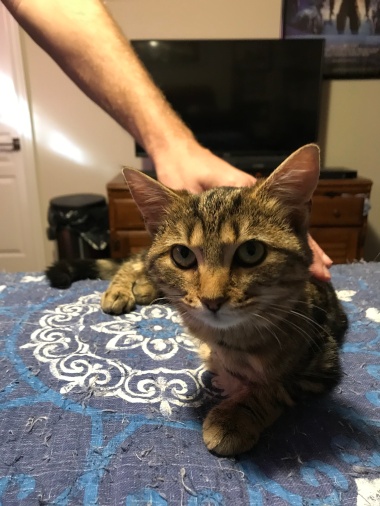