Something to Rejoice About

It’s unusual that I write two posts in one day, particularly after the massive one I wrote this morning, but a project I’ve been working on for a couple of weeks is now complete and I has the feels about it.

I have been doing embroidery since age 8.  I started off with freeform embroidery (usually crewel) kits around 1975-ish, learning from my mother and my grandmother (before she died in 1978).  Embroidery became my primary textile craft in my teens, and I completed some very large, detailed kits with a great deal of blending and variety of stitches.  When I was in my 20s and early 30s, cross stitch became the dominant type of embroidery kit available, and I completed a number of detailed charts of historic buildings. Meanwhile, in the SCA, I completed a few small freeform projects using Bayeaux tapestry stitch and split stitch. I also did panels in or nué for the Septentrian cloak project.  Later, I embroidered a number of collars and cuffs using simple outlining techniques.  Two years ago, I learned some Russian embroidery techniques and last year, I took a class on opus anglicanum, the technique worked mostly in split stitch that some people call “needle painting.”  This started to open up more possibilities for designing my own projects–but it was membership in two Facebook groups – Snarky Crafters: Because Punching People Is Frowned Upon and Mildly Offensive Fiber Artists–that began to expand my understanding of what an embroidery project might be.  These (mostly) women were doing things like subverting embroidery kits with snarky messages, knitting dicks decorated like R2-D2, and celebrating just about anything they wanted to celebrate.  This gave me Ideas.

My first idea was to do some of my favourite quotes (snarky and otherwise) in cross stitch, something I’d already done with charts from a book called Really Cross Stitch. 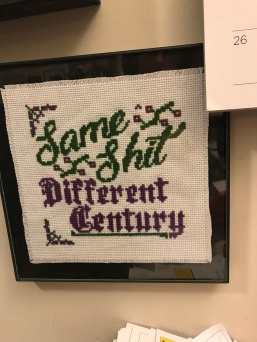 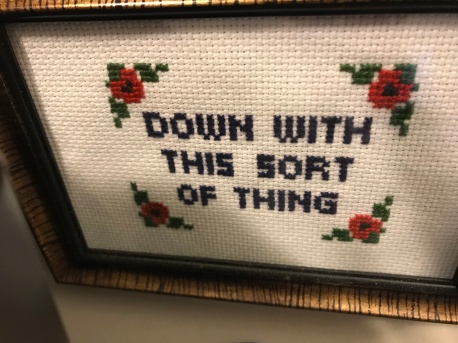 I purchased a book of alphabets and started planning.  But one of the quotes I liked began demanding more.  It’s attributed to Dmitri Shostakovich, about the ending of his Fifth Symphony, which seems to end on a note of victory which is hugely subverted by all kinds of “wrong notes” that make it seem forced. “Our business is rejoicing”, said Shostakovich about that ending.  Not only is that quote about the Fifth Symphony (one of my favourite, if not THE favourite Shostakovich symphony), it’s also about history, and the ability to find layers of meaning in works of art.  And it’s vintage Shostakovich snark.  So yeah, cross-stitch that sucker.  But I kept getting Ideas.  How would I decorate it?  Maybe use Shostakovich’s signature, or perhaps the musical depiction of his DSCH motif?  The former had possibilities.  The latter, to my strict sense of authenticity, was out of period; Shostakovich didn’t start to play with it until the late 40s, about ten years after the quote.

Well, then, what about a portrait?  I looked at cross stitch pattern generators.  Nothing really did it for me.  But some of the artisans on the Facebook pages were using simple black and white outlining techniques.  Maybe I could do that.  I had learned how to transform photographs into black and white “line drawings” using GIMP.  I found a photo I thought would work well and morphed it.  But looking at the results, I wasn’t satisfied.  So I used the transformed “drawing” as the basis for my own line drawing, using technical pens.  There.  That would work.  I could embroider that in black thread on white cotton, and then mount that on some red fabric with gold stars (faintly Soviet!) I’d found during the holidays.  I could also embroider the quotation and the signature.

But I was out of black silk thread, as it turned out, and when I went to Gitta’s (my source for the Splendor silk thread I like to work with), they were out, too.  The plan in my mind began to morph.  How about working the piece in a very slightly wider range of colours–very dark grey in place of black, and then a medium and a lighter grey for shading?  That could work. Once I got home, I realized that I could use the three colours very effectively to create the look I wanted.  Oh.  And I could use crosshatching of the medium grey on the suit to create the feeling of weave, in contrast with satin-type stitches on the tie and shirt. And I’d need just the tiniest spot of slate blue thread.  (See if you can spot it).  I finished it in the hotel room on my trip this past weekend.  I then used a fabric marker to colour the white cotton background black. 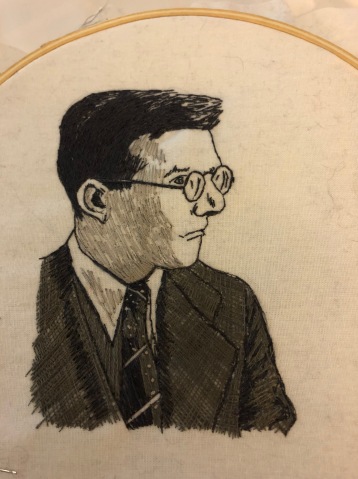 The hardest part of the project turned out to be the writing.  I found a typeface I liked, blew it up to the right size, and traced it, but doing freeform embroidery of writing turns out to be fairly challenging, and so it’s not perfect, but it’s good enough.  (The signature, on the other hand, was easy). I used black thread to sew the piece to my red fabric, and then used Heat ‘n’ Bond to add the quotation and the signature.

I am very happy with the final product.  It also gave me a few ideas for future projects, including possible collaboration with an artist whose style, I think, would work very well with this kind of embroidery.

And now, my business is rejoicing, because I Made A Thing no one else has ever made.  (No snark on my part. I don’t have Stalin looking over my shoulder.