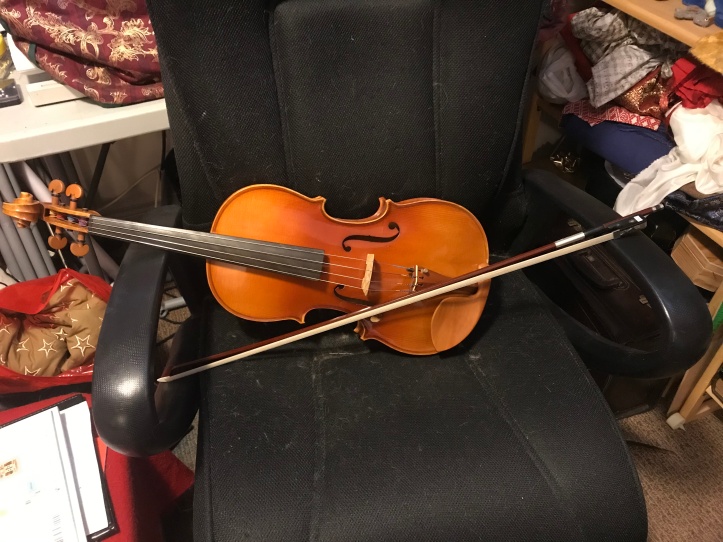 After yesterday’s rather dark update, something a little brighter.

It was almost a year ago that, full of desire to play music once again, I rented a viola.  I had hoped to spend time getting enough up to speed to perhaps contemplate playing in a community orchestra or at SCA events.  I joked with friends who were likewise discovering or hoping to rediscover stringed instruments about perhaps eventually forming world’s most amateur string quartet.

And then, the instrument mostly sat untouched for the ensuing months.

When it became clear two weeks ago that I would be spending nearly 24/7 of my time at home, I heard the call of music as a bit of an imperative.  If I could not attend concerts any more, then I wanted to spend at least part of my day making my own music.  And so, I tuned up the viola–or, at least, I tried to.  The A string had other ideas and immediately broke.  Luckily, the shop where I rented the instrument does ship, and after an online consult with someone there, I ordered a new string.  And just to be sure, I purchased a complete set of inexpensive strings on Amazon to have as backups, just in case any of the other strings decided to follow suit.

It’s amazing what knowledge apparently never leaves you.  I still remembered how to install the new string.  I also remember how to tune the instrument, although for now I am using a tuning device rather than the old-fashioned way, as I’m not yet used to the tuning pegs on the instrument (that will come, I am sure).

Most importantly, I still remember how to hold the bow and the instrument itself, and the fact that I haven’t done this in many years (apart from a brief period when I purchased a cheap violin from Amazon in the 2000s) means that I’m not yet really noticing that it’s a larger instrument than the violin.  It helps that I already know the fingerings for three of the four strings..

What’s going to be the biggest challenge is to train my brain to read alto clef.  What I’m realizing is that in terms of the names of notes, everything on the C clef is one pitch below the G clef, although an octave lower.

I’m already about halfway through my first instructional book–not surprising, since I already know all the basic techniques and fingerings an how to read music (outside of the new clef).   I’m spending about 20 minutes a day practicing, a period recommended by a friend of a friend who is a violist.  And as much as all I’ve done so far are some D major scales and some very basic tunes, I am hugely enjoying just making sound.

So.  I am again a musician, even if I will never be a professional.  I feel like I am rediscovering a secret I once knew by heart, or opening up a long-locked, cobwebby chamber, where the furniture is all still there but needs a good dusting, where I’ve decided to spiff things up by changing the paint colour by a few shades.  Simply putting my music on its stand and taking up my bow evokes so many memories–my very first days in the 4th grade, my private teachers, my junior high and high school orchestras, and all the music I was part of over those years.

This, in turn, gives me hope for the life beyond the current crisis–one where I might one day, once again, take a private lesson, or play in an orchestra.  It confirms to me that perhaps one outcome of this time confined at home will be a better understanding of where I want to seek out joy and connection, and what paths beckon me to explore them once again.

*****
Yesterday’s post really struck a nerve, both with people who were concerned for me and with a number of my fellow Americans living in Canada.  If there is one thing I have learned over the past few years is that it’s so important to name your fears and anxieties. Saying the words helps to release, to some extent, their power over you; even though the worries do not diminish, knowing that you are not alone helps immensely.