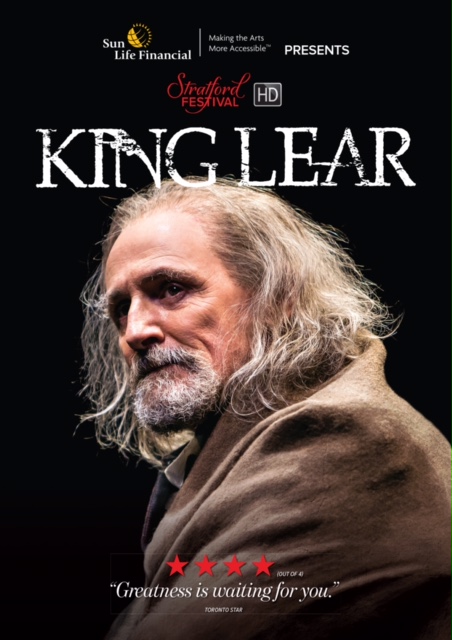 I had hoped this summer or fall to attend a few performances at the Stratford Festival–in particular, Richard III with Colm Feore. Now, as the future is uncertain, the season is on hold–but the Festival has started screening the filmed versions of a number of its plays over the past few years.  First up is King Lear, a production from 2015 also starring Colm Feore in the title role.  Like the filmed versions of various concerts I’ve viewed in the past few weeks, this one was both wonderful and sad at the same time–wonderful, because it’s a gorgeous production, with costuming (for once) keyed to the period when the play was written and first performed and outstanding acting and staging.  Sad, because I had only just rediscovered the joy of attending live performances at the Festival last year and now it’s uncertain when I might get to experience it again.  But then I settled in to enjoy the play and its timeless and timely themes.

King Lear, for those who do not know it or who haven’t thought about it much for years (I’m probably in that latter category) is about an aging king who decides to divide up his kingdom between his three daughters so he can retire to a comfortable life.  He makes the decision based purely on how much his daughters are able to flatter him–and while his eldest daughters Goneril and Regan are effusive and fulsome in their praise, his youngest, Cordelia, refuses to flatter him at all.  She ends up humiliated and banished, although one of her two suitors, the King of France, decides to marry her in spite of this.  Meanwhile, in a subplot, illegitimate son Edmund schemes to wrest favour with his father, the Duke of Gloucester, from his legitimate heir, Edgar.

Things don’t go well for Lear – whose plans for comfortable retirement with the trappings of power are thwarted by Goneril and Regan, who see Lear as only a foolish old man now that he is no longer king and has abdicated his power. He’s eventually driven out of their homes and descends into madness, wandering the moors and trying to command the weather to obey him.  Edgar is likewise supplanted in his father’s favour and joins Lear on the moors, although his madness is mostly feigned. Meanwhile, Edmund puts himself at the centre of the plot, playing a key part in the scheming against Lear, and eventually in the schemes of the two sisters against each other.  His father, still loyal to Lear, has his eyes plucked out for his troubles.  Edgar finds him, but does not reveal himself to him, and keeps him from killing himself–but Gloucester dies anyway, unable to go on.  Meanwhile, France has invaded England, with Cordelia leading.  Lear now knows that flattery does not mean loyalty, and they reconcile, but are defeated in battle, taken prisoner, and sentenced to be executed upon the orders of Edmund.  Edmund, now at the centre of power, brings about the downfall of the sisters–Regan is poisoned by Goneril, who, in turn, kills herself.  Edgar, returning, reveals the treachery of Edmund and mortally wounds him.  Edmund tries to rescind the execution order, but it’s too late for Cordelia.  The play ends with Lear, cradling Cordelia’s body, howling in grief, fully aware of the tragedy that his blindness has wrought, and dying of a broken heart.  Most of Shakespeare’s tragedies have bleak endings, but this one is one of the bleakest.

Colm Feore’s performance as Lear is wonderful.  In the first scene, he is a distinguished, regal man, still apparently vital, but the moment he gives away his kingdom, he seems to diminish and age before our eyes, losing first his kingly garments, and then, his sanity.  His gaze becomes wild, and he limps around the stage as he loses his grip on reality.  He also disappears into the role completely behind his long hair and beard.    The rest of the cast was equally as strong, particularly Stephen Ouimette as the Fool, Evan Buliung as Edgar, and Scott Wentworth as his father Gloucester.

There are certainly hard lessons in this play for our current day–how willful blindness and ignorance can lead to disaster, how flattery and lies can destroy lives, and that sometimes it’s too late to do anything but clean up the mess in the aftermath.  The reckoning always comes, though, eventually–and that reckoning has a way of harming innocent people.   But it is also just a damned good play, and well worth some 2 1/2 hours of my time–especially on a day I was feeling particularly down.   Once again, I got to experience a play I missed seeing live five years ago, and it took the current crisis to give me that chance.  Next up (starting this coming Thursday) is apparently Coriolanus–a play I’ve never seen performed.

Incidentally, I am also waiting on a DVD of the 1971 Russian filmed version of the play, directed by Grigori Kozintsev with music by Shostakovich.  I’ve been told that even with subtitles, it’s a particularly amazing performance, and I look forward to seeing it now that the play is fresh in my mind.