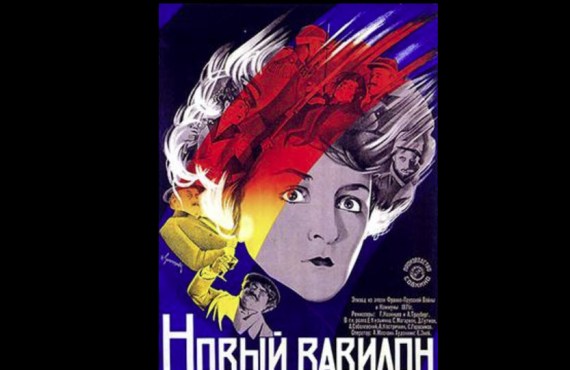 After watching Grigori Kozintsev’s King Lear a few days ago, I assumed the next of his movies I would see would be Hamlet, which was part of the two-DVD set I purchased.  Instead, someone on a 20th century music Facebook group posted a link to the fully restored version of The New Babylon, the 1929 movie that, as I mentioned earlier, marked the beginning of Dmitri Shostakovich’s long film partnership with Kozintsev, who codirected with Leonid Trauberg, his partner in most of his early films.

I already own a recording of the music, which is amazing and evocative, alternately fizzy, sarcastic, and tragic, and I knew the movie had something to do with the Paris Commune.  It really is a fascinating film, one of the first in the Soviet Union to have a film score specifically written for it, but it was not entirely successful, partially because cuts were made to the final version that made it difficult to properly sync up the live music that was meant to accompany it.  Both the score and the movie were lost for many years.  The former was rediscovered in 1971, but the score was only known in a piano version until it was unearthed–complete with cues to go along with the original movie–after Shostakovich’s death. The rediscovered version film is apparently the edited version, which runs a little over 80 minutes long;  with the rediscovery of the original score and cues it has been possible to produce a “soundtrack” to go with the pruned version.

The Soviet avant-garde of the 1920s is full of the kind of experimentation that marks the 1920s in many other European nations, and this film is firmly planted in the midst of it.  Kozintsev and Trauberg were founders of an avant-garde theatrical movement called the Factory of the Eccentric Actor, which was an attempt to create a Soviet practice in keeping with other current movements such as surrealism, futurism and expressionism. The movie’s topic is certainly keeping with the themes of revolution and socialist ideas that were still rather shiny and new and idealistic, especially as the more violent days of the first few years of the Soviet Union receded in memory and artists, musicians, poets, and playwrights still felt free to experiment and challenge the government.  Those days were starting to end in 1929, however, with the ascendancy of Stalin, and many believe that Kozintzev and Trauberg chose the topic of The New Babylon as much for its tragic love story and chance to depict the delights of Paris as for its politically correct topic.  In any case, the film is a series of eight “acts”, each focusing around a shop assistant named Louise and Jean, a soldier.

The film opens in a decadent, exuberent Paris as soldiers leave for the Franco-Prussian War.  The New Babylon is a department store brimming with lace frocks and parasols and ladies in endless frippery jockeying for position.  This is intercut with scenes of the working classes and their misery. Louise, who has been promoting items on sale, is taken aside by the store’s assistant manager and presented with an envelope.  She thinks it’s a dismissal letter, but it turns out to be an invite to a ball, where she’ll meet the top-hatted, corpulent owner of the store, who’s “looking for love.”  There’s can-can, abundant food, outrageous clothing, and all manners of debauchery.  Louise is uncomfortable.  But she is to meet a young soldier, Jean, leaving for war.  In the next scene, Paris learns of the defeat of the French in the Franco-Prussian War.  The fat-cat store manager, who had been working to stage an operetta, complains that the defeat has ruined his fun  Meanwhile, we see more of the toils of the working class.   In the next scene, we meet the workers again, meeting as the Commune.  Jean shows up, has his boots repaired and is given bread, but declines to stay, returning to his unit. There are scenes of workers doing their jobs of sewing, laundering, and shoemaking with unrestrained joy now that they are no longer under the thumb of their oppressors. Then, as the army and the Commune come into conflict, Jean is given a chance to join them once again;  again, he refuses, giving Louise a passionate kiss before going to Versailles with his unit as the army prepares to attack the Commune.  The bourgeoisie all turn out to watch the army attack the city, watching it as if it were a theatrical presentation.  The Commune is defeated, its leaders rounded up, including Louise.  As Jean looks on, she’s given a chance for reprieve if she confesses to being a prostitute.  She refuses, and Jean is sent off to dig a grave–presumably for her.

What makes the film special is that it captures beautifully, in black and white, an impressionistic view of fin-de-siecle Paris.  There are gorgeous shots of the play of light and shadow, the overflowing abundance of the department store and the grim blankness of the abodes of the poor.  It feels like black-and-white Renoir.  The parasol becomes a symbol of the privilege of the bourgeoisie–seen in the very first scene in the department store, in shots taken in the rain, shadowed on cobblestone streets, and at one point opened in the face of Jean, who is looking for where the prisoners (including Louise) have been taken.  There are also all kinds of interesting filming effects, including cameras that are moved to create a blurred effect.  The acting is stylized and emotional, focused in particular on the eyes and facial expressions, almost like a kind of pantomime, yet the emotions evoked are real.

To me the film further illuminates the parallel paths of Shostakovich and Kozintsev.  The latter’s King Lear was made in 1971, around the same time Shostakovich was composing his final symphony.  When The New Babylon was made, Shostakovich was composing his Symphony #3, one of two that are generally considered both “avant-garde” and agitprop.  This movie could be considered in the same way.  It definitely shines a light on how experimental the Soviet arts scene was before the ideas of “Soviet Realism” began to take hold.  And Shostakovich’s music is amazing–debuting, for the first time, the extensive use of quotations from other works that will feature in both future film scores and in many other works.  Here, pieces such as the Marseillaise, the Offenbach Can-Can, and a gorgeous piece by Tchaikovsky played on the piano all serve to give added meaning to various scenes–a technique Shostakovich doubtless learned as a pianist accompanying silent films.  Some of his detractors have always seen his quotations of other works as derivative, but yet no one can deny what hearing a familiar tune can do to evoke a particular scene or mood.  It creates layers of additional meaning beyond the notes themselves–for instance, even having never seen the movie before, I could envision the scene that went along with the quotation of the can-can music, and that was precisely what I saw–but the context portrayed on screen revealed the rather sarcastic use of the tune.

So, definitely a worthwhile watch for anyone who’s a fan of 1920s cinema, Shostakovich, or in the evolution of cinematography.