Growing up, I didn’t have an overflowing closet of clothes, nor was I one of those girls who pursued brands and designer labels.  But that did not mean that I didn’t pick what I did have very carefully, or that there were not certain items that were very special to me.  Case in point:  I had one particular dress that I remember especially fondly–my Gunne Sax dress.  It looked like this: 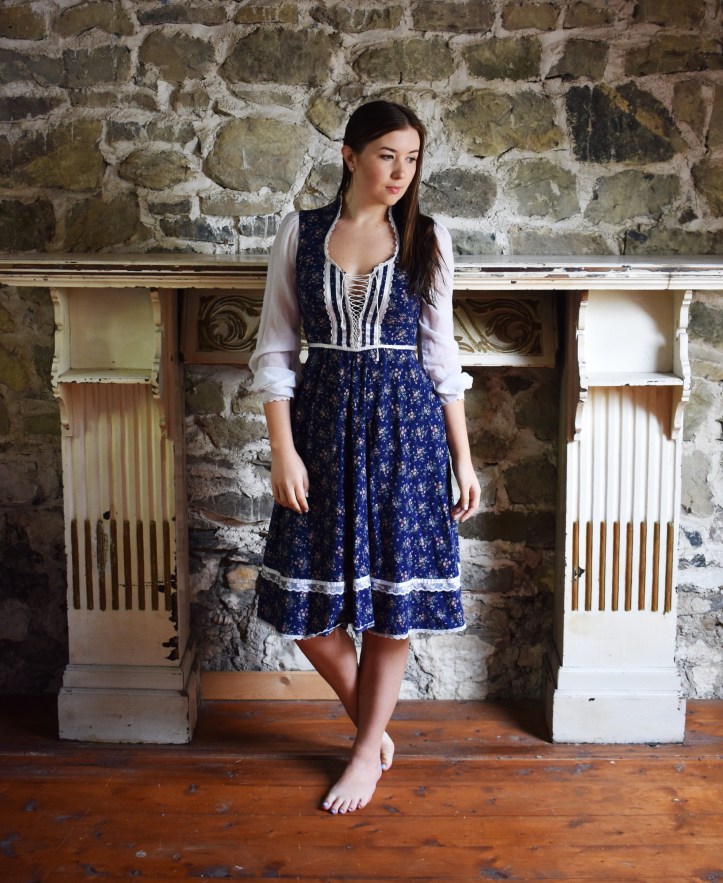 No, that’s not me, but this is the exact dress I owned.  I can’t remember precisely the date, but I believe it was around 1980-82 or so.  Gunne Sax was a brand founded in the late 60s that through the 70s became particularly known for their prairie, Edwardian-influenced, and medievalesque designs before moving, in the mid-later 80s, to more typical prom dress–type attire.  There aren’t many pieces of clothing I can remember precisely where they were purchased, but this one was in the juniors’ department at the Lazarus store in Kingsdale Shopping Centre, just down from the jewellery counter.  It’s interesting–even then, I was looking to what might be called a peasant or Renaissance style–something that would become a huge part of my life maybe ten years later when I joined the SCA.

I loved this dress.  If I ever found it again in a vintage clothing store in my size, I’d buy it. (Apparently, these dresses were, as was common at the time, sold only up to a size 13. That’s a size 8 or so in today’s sizes, so a 13 would just about fit.   These dresses, as typically happens, were considered deeply uncool for many years, but are now collectible.

Interestingly enough, today in history two strikingly similar aviation milestones occurred.  In 1927, Charles Lindbergh was the first to cross the Atlantic solo, in his plane Spirit of St. Louis, landing in Paris.  Five years later, in 1932, Amelia Earhart flew from Newfoundland to Londonderry, Northern Ireland, becoming the first woman to cross the Atlantic in a solo flight.

The two aviators had strikingly different fates.  In the same year Earhart made her flight, Lindbergh’s son was kidnapped.  The ransom money was raised and paid, but the child’s body was found shortly thereafter.  Two years later, a man was caught spending one of the marked bills that had been part of the ransom, and other evidence was found in his home, leading to his conviction and execution in 1985. Lindbergh famously opposed the US entry into WW2–at least up to Pearl Harbour–and was suspected of having Nazi sympathies.  Denied reentry into the Armed Forces by the White House, Lindbergh served as a consultant in the Pacific Theatre as a civilian during the war, even shooting down a Japanese observation plane. After the war, he continued as a consultant to the Air Force, but also became known as a conservationist before his death in 1974.

Earhart became a faculty member at Purdue University after her transatlantic flight.  The university fundeed her 1937 attempt to circumnavigate the globe in her Lockheed 10-E Electra.  Her plane was lost hear Howland Island in the Pacific and has never been found.