Growing up in Upper Arlington, Ohio, I lived in a community that was overwhelmingly white.  What few people of colour lived in what was almost always described as an “exclusive suburb”–in both the figurative sense and, originally, in the literal sense–were of Asian descent.  When I attended high school, there was not one single Black person in my graduating class.

What I never knew is that just north of the wing where I had my organic chemistry and French classes, at least three Black people were still buried.  A larger cemetery had been moved when the high school was built–it once lay beneath the parking lot where I parked as a senior.

And I didn’t hear the name Pleasant Litchfield until about a year ago, when construction on the new high school raised dusty memories of the family burial grounds that were moved to Union Cemetery when the original high school was completed in the ’50s.  Litchfield, a master blacksmith by trade, owned a huge chunk of land in what is now central Upper Arlington–not just where the high school was built, but also where Tremont School, Northam Park, and the library now stand.  Litchfield was wealthy and well-respected in the community, endowing a school and co-founding a church (that still exists today), among other things. 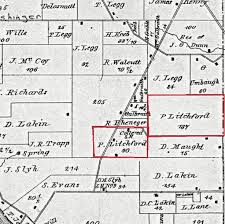 Pleasant Litchfield was also Black, a freed slave from Virginia.  His skills as a blacksmith were in demand, and he was able to rely on the goodwill of neighbours to attest to his good character–necessary for a Black man to acquire property, so that by 1842 he owned a substantial estate in what would eventually become part of Upper Arlington, where he lived until his death in 1879.  Since Black people were not permitted to be buried in large, local cemeteries like nearby Union Cemetery, the burial plot he established on his property was likely used for not just his own family’s plots, but for other local Black residents.

Upper Arlington wasn’t founded until nearly 40 years after Litchfield’s death, and the area where he had lived remained part of Perry Township until the new suburb began expanding north of Lane Avenue in the 1940s and 1950s. The irony of this all, of course, is that from the time it was founded in 1918 to the time it became illegal in 1948, most properties in Upper Arlington explicitly excluded Black owners from purchasing them–a not-uncommon practice at the time.  And even when the practice became illegal, real estate agents usually did what they could to dissuade and prevent Black families from moving to Upper Arlington into well into the 70s–and I would not be surprised at all to find out the practice still continues, if well concealed. Upper Arlington’s Black population is still only about 2%.

The Litchfield burials in Union Cemetery were placed in a back corner, without individual headstones, so we don’t know specifically who was buried there.  And we don’t know the identity of the one full and two partial burials that were discovered last week in an area I remember driving my car over more than once.  Pleasant Litchfield’s memory had been literally erased from the lore of that particular place.  That is now likely to be rectified, thanks to some detective work by a couple of reasearchers, Diane Kelly Runyon and  Kim Shoemaker Starr, the latter of whom found some old headstones and decided to research their origins.  This led to a book, Secrets Under the Parking Lot, which in turn led to an archaeological dig to determine if anything remained of the burials.  (Note:  I have this book on order.)  When possible grave shafts were identified, the focus became recovering any possible human remains in a respectful manner.  One complete and two partial sets of remains were recovered.

The articles on the archaeological dig indicated that there are now plans to erect some kind of memorial marker at the site, as well as to incorporate the story into the history curriculum taught in UA schools. (I actually remember learning very little about the history of Upper Arlington at all when I attended school there, although I graduated 35 years ago, so things have definitely changed). It’s still a little hard to believe that I parked my car where a cemetery once stood, and that so much was forgotten about a time in which a Black family was hugely influential in the area that would eventually become Upper Arlington.

(Thanks go to my friend Teri McCarthy for directing me to this story, including this coverage from WOSU on the story.)