For many months, my desire to create–other than in writing–was mostly silent. While the words flowed, the needle did not flash, the brush did not stroke, and the pen spoke only through the keyboard.  Then, something changed, and the desire was rekindled, and in just the past few days I have completed one piece of needlework and started another, and once again unpacked the gouaches and metallics to paint a page sketched out in the late days of February for a deadline that had once loomed in the short-term future, a deadline that vanished into the interminable no-man’s-land of not knowing when.  When called to recall, I paused for a moment, struggling to remember just where I had placed a pencil sketch on black paper, the nascent work in progress, and then there it was, where I had left it when I had left it.  Two evenings of work, and it was complete, and awaits its future. 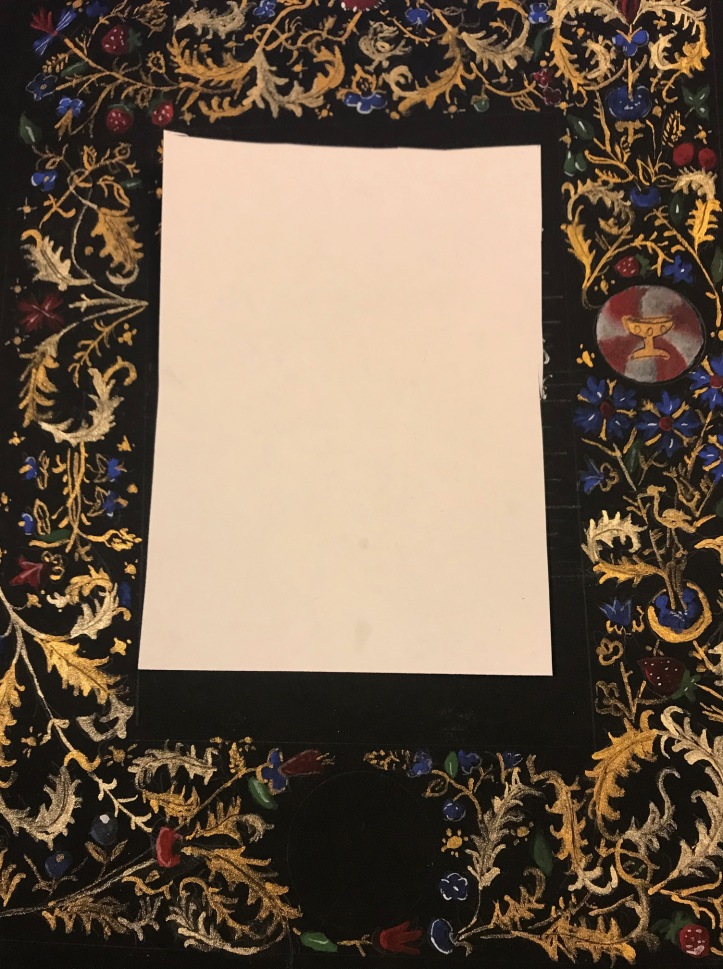 The needlework was kindled by the three shades of grey silk that I retained from the last project completed before the world had changed, kindled by a sketch by Nikolai Sokolov done in 1942 of Dmitri Shostakovich, in evacuation in Kuibyshev.  His Seventh Symphony was now complete, but the uncertainty, the danger still lay ahead while he relaxed with friends in his makeshift accommodations and played cards and laughed at Sokolov’s caricatures.  He was 36 years old, and in the sketch, done in ink and black wash, he looks far younger.  I had found a way to turn a photograph into stitches before–could I do the same with a pen and ink sketch?  It required just the right ground fabric, a way of transferring the details of the sketch to the fabric, and above all, a delicacy in stitching thin pen strokes combined with the challenge of portraying the wash of ink on paper.  It vexed me for several days until suddenly, I could not put it down until it was finished.

I am working on another Shostakovich portait now–this one more abstract, to be done entirely in satin stitch.  And then?  I had been searching for inspiration when a certain cat appeared in my Facebook memories, and I know now where I will go next.  I may not like the state of the world, but I am surviving, and my creativity is resistance.

Meanwhile, a long weekend looms, with an extra day off planned. Summer is dying, and the world is a scary place, but for now, there will be a hike in a conservation area, a visit with friends, perhaps a Zoom family reunion with cousins–recalling family reunions on Labour Day weekends past.

And there are other creative plans for coming weeks.  I have apparently given myself permission to create for no reason whatsoever besides the fact that it pleases me to do these things again.  Today I had a massage, and the therapist was relentless with the knots that plague my shoulders and upper back–the first I’ve had who has delved that deep, but I did not flinch, and I could feel the tightness release.  In the same way, I have worked to revive my creative spark to create things–tangible things–and thus pressed, it has been released.

I cannot save the world. The things I create will not make it a just place, but they make me a better person, give me the strength to be in this world and to continue to engage, to bring one small light into a dark place.