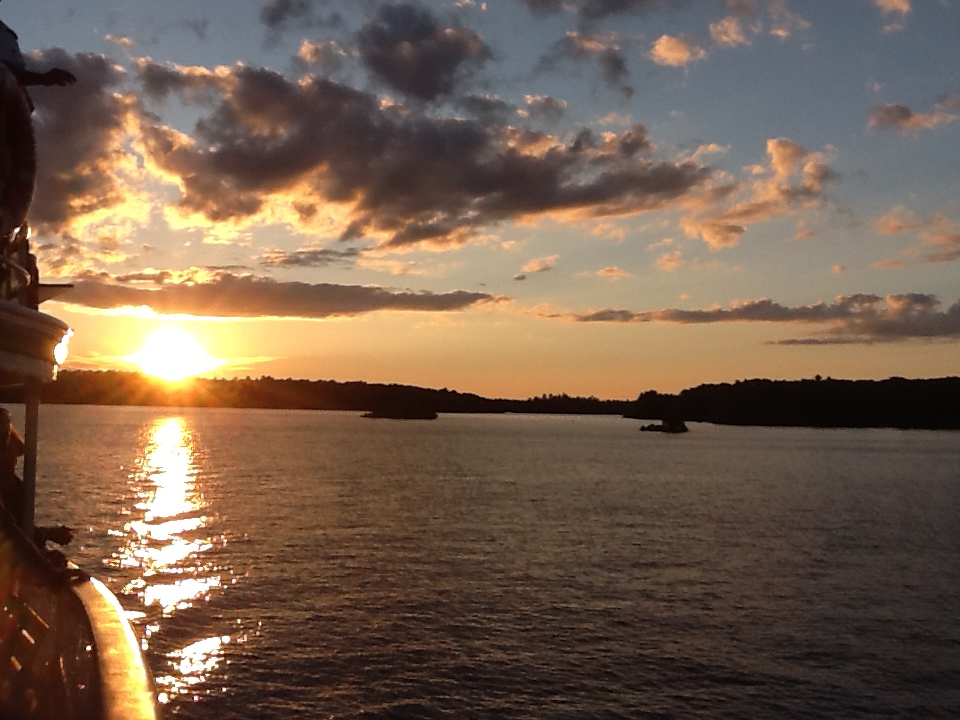 “Let’s not confuse getting better at stuff with being a better person. One is a much bigger priority than the other.”  The context here is regarding people who pursue goals with the sole purpose of impressing others, at the expense of community–that is, letting vanity and superficiality corrupt the noble goal of self-improvement.  This one made me stop and think for a bit.  I love learning for learning’s sake, the joy of discovering knowledge, the privilege of thinking about things, working through them, understanding.  At the core, this is driven by my rather insatiable curiosity and desire to make sense of the world around me.  But it has always had a second part–to share this knowledge and sense of curiosity with others and to inspire them to look for themselves.  It’s one of the reasons why I wanted to be a historian–not to become famous or renowned or (ha!) rich, but to see that spark lit in my students, to see them ask questions, to search, to want to know.

I was thinking a couple of days ago about my favourite teachers over the years–Mrs. McCullough (ninth grade general science), Mr. Wagner (Brit Lit my senior year in high school), Mrs. Guddat (Shakespeare Seminar), and then the OSU profs–Prof. Balcer, Prof. Lynch, and the classics prof I had my first year who sparked my interest in history to start with (whose name I’ll think of, hopefully).   All of them challenged their students–getting an A from any of them was an achievement–but inspired through their passion and love for their subjects the desire to go beyond, to learn more.  Years later, I can still recall things I learned with each of them, and they’ve become part of who I am.  That’s who I want to be, and since leaving the academic path I’ve had to find a way to do that outside of formal classes.  It’s one of the reasons why I started blogging–I wanted to write about that constant, ongoing progress of learning and to encourage others to read what I’d read or hear what I’ve heard and engage with it in a thoughtful manner.  And the other thing I learned from those beloved teachers?  It’s not the topic that made those classes memorable–it was what each of them brought to it.  I was thinking about Mr. Wagner in particular.  He was so popular as a teacher not because everyone was just nuts about British Literature, but because he taught the class, bringing to every single unit more than was required.  When we studied the romantic poets, we learned about the lives of Keats and Shelley and Byron, with slideshows of Mr. Wagner’s travels in England.  We formed Viking longships out of chairs when we studied Beowulf.  We had a cursing contest when we studied the witches’ scene in Macbeth.  We got to know these poets and authors as people, and to understand how their lives impacted their writing.  What did that do for me?  It made me understand how knowing the context makes any art more meaningful.   Literature, art, music–and history–are all created by people not so different than me.  Knowing how they responded to the events in their lives, and how that impacted their work has meant that the knowledge I gained in that class has never left me, because it was made relevant to me.

Evening:  I rarely write something like this without turning it around and reusing it.  Tonight I gave a speech in my Toastmasters club about how my teachers had inspired me and taught me far more than about the subjects of the class.  In that wise, this is one of the reasons I continue to seek out learning opportunities.  It’s not so much to get smarter, or to get a fancy degree (been there, done that, no t-shirt, I didn’t even get the regalia), but to understand that the need to keep learning and to be curious is fundamental to who I am–and that means being fully open to learning from others who have perspectives I don’t.  That’s the fun of it!   And then, where I can, to turn around and try to be that person for someone else.  And I can do both in so many ways.   Look below here, and find out why I listened to four separate performances of the Schumann Cello Concerto today, as well as reading several articles–all because of wanting to know a why.

*****
On to some time with Schumann’s Cello Concerto, and Shostakovich’s reorchestration of it.  As I mentioned yesterday, it was once canonical that Schumann was not very good at orchestration;  add that on top of his alleged mental and creative decline in his later years, and you set the context for why a composer like Shostakovich–who, so far as I know, is a bit of a blank slate regarding Schumann (he’s not known to be one of Shostakovich’s influences at all)–would decide to reorchestrate one of his works.  The reorchestration was at the request of his friend (and dedicatee of both his Cello Concerti), Mstislav Rostropovich.  Rostropovich had played the concerto before (and you can listen to a recording here).  In 1966, he apparently asked his friend to have a go in redoing the orchestration–and this was the result.  Was it successful?  Those who buy into the idea that Schumann (especially late Schumann) couldn’t orchestrate his way out of a paper bag–even they’re a bit mixed.  ” Its beginning sounds like Schumann, but before long we are in the strange world of Schumann’s notes and Shostakovich’s sounds. The squealing, piccolo-led woodwinds and the mocking trumpet definitely make the dour first movement more colorful, though it’s questionable whether or not this is an improvement. The harp in the second movement is an inspired touch, and the finale benefits most from Shostakovich’s explicit style,”  said Victor Carr, reviewing a CD of rather obscure Shostakovich works.  Said Chicago Tribune critic John von Rhein, reviewing a concert where the reorchestrated version was played:  “Schumann’s thick, awkward scoring of the orchestral accompaniment to his cello concerto always was a problem. Shostakovich cleared away all the doublings, shoved the woodwinds into the foreground and made much of the scoring sound as hard, bright and tangy as his own music.”  That’s a pretty good description of what one hears when one listens to the original vs. the reorchestration in sequence–a whole lot less of an emphasis on strings,  the introduction of a harp into the middle movement–and, to my ears, something just a bit off, a little like my reaction to hearing Mozart’s reorchestration of Handel’s Messiah.  It’s not really Schumann, but it’s not really Shostakovich, either–although maybe it has some of the feel of some of his earliest, fairly traditional works, grounded as they were in a more Romantic sort of heritage.

And others–particularly cellists, and those interested in period instrument performances, have pushed back on whether Schumann’s orchestration was ever really “defective” in the first place. James Nicholas addresses this:

“The Schumann concerto has been treated especially casually in this regard; so much so, in fact, that I suspect that our most basic notion of its character and content may be seriously distorted. There are two fundamental reasons for this. First, the unusual technical difficulty of the piece has, in the minds of some, justified all sorts of changes in the text, principally involving basic tempi and also articulations. Secondly, false assumptions regarding Schumann’s mental state at the time of the concerto’s composition, and all-too-often repeated myths about his insanity in general, have led to general acceptance of the alleged necessity and inevitability of making such changes.”

Anssi Kartunen, in this piece, mentions an important point:

“the orchestra itself has changed a great deal since Schumann’s days. As the string sections of the orchestras that Schumann wrote for were significantly smaller than today (in Leipzig: 9-8-5-5-4) the music does easily sound thick if played with almost twice the number of strings against the same number of winds. The strings used to be made of gut whereas nowadays they are of metal and optimised for maximum volume. Vibrato was used much more sparingly.”

He goes on to mention that conductors often ignore Schumann’s metronome markings and other markings in the score, failing to bring out features such as how repeated notes in the third movement cease being “boring” when played the way Schumann actually wrote them.  (Schumann was, interestingly enough, correcting pre-publication copies of the work just before he wrote the Ghost Variations–so maybe, once again, some assumptions made about his sanity or lack thereof.)  Nicholas adds,

“The cello concerto, in spite of its swift composition (the orchestration was done between October 18 and 24 of 1850), contains numerous fanciful and highly original touches of orchestral color. Consider the very opening: the chilling woodwind chords and the rich three- and four-part pizzicato chords in the strings suggest the strumming of a colossal harp at the beginning of a bard’s epic ballad (or at least they do if conductors don’t instruct the violins to play the chords divisi). Schumann uses to full advantage the possibilities of the newly invented valve horn by assigning it the soaring principal theme in the key of A-flat minor (bars 143 and 147). The scoring for violas and a second solo cello in the second movement is wonderfully lush, and the arresting, eerie entrances of the winds in the coda of the finale (bars 699 ff) would have done Mendelssohn proud. Very interesting and noteworthy are the two specific indications for stopped horn during the recitative following the second movement (bars 336-338); a menacing sound we would associate much more readily with Mahler! Here, the valve horn is called upon to produce a sound which originated in the supposed limitations of its predecessor, the natural horn. It’s unfortunate that conductors frequently understate or ignore this startling effect.”

Given these criticisms, I decided to find a performance of the work on period instruments (and I am assuming, the period complement for the orchestra).  This performance is linked below.  The different balance and timbres of the winds is immediately apparent.

Another overlooked aspect of the concerto is its radical (for the time) construction as a unified piece, its three movements played without pause.  And Carmine Miranda notes that the piece is filled with “musical cryptography” –coded messages within the piece, many of which likely refer to his wife, Clara, sometimes in combination with his own name.  (I find this utterly fascinating, given the fact that Shostakovich adopted similar encoding devices, most famously with his DSCH motif, although apparently not so intensely as Schumann did.)  So there appears to be a strong argument that what Schumann was doing in this (and other works of his late period) was actually intentionally innovating, and that the “oddness” of these later works had nothing to do with any decline–it was intentional.  Indeed, if you listen to the Cello Concerto without any of the narrative about it being somehow defective or influenced by encroaching insanity, what you hear is a piece that effectively encompasses many moods.

Interestingly enough, Rostropovich apparently went back to using the original version.  The reorchestration, apparently completed in 1963, is Op. 125, which according to at least one source, Shostakovich believed was Schumann’s opus number (it’s not–the Cello Concerto is opus 129). Shostakovich’s opus numbers were not assigned sequentially–for instance, op. 122 (Quartet no. 11) dates to 1966, so interestingly enough, Op. 126 is his second Cello Concerto, a very, very different work, but for the same dedicatee.

The concerto on period instruments:

Meanwhile, I’m told there is a debate on. Twelve days now…