Today is Christmas Eve.  I grew up in a household where my parents were well-off enough to afford many luxuries–but they eschewed the empty ones.  There was always money for things like music or ballet lessons, or for a modest vacation within driving distance (the farthest I ever went was Florida).  Dad had his service club, and we were active at church on committees and administration (being Presbyterians, Dad served on Session a couple of times and was always involved as an usher and on the coffee committee).  Christmas never meant excess.  I usually received four or five decent-sized gifts and some smaller ones.  There were a couple of years where I received a “big” gift–like the Barbie Townhouse year or the Electronic Quarterback year–but mostly I do not remember having massive Christmas lists.  I got a lot of surprises on Christmas Day, including some that were a little head-shaking (I particularly remember what we’d now call an “ugly sweater” received in my teens that I returned).  And I always remember being conscious of not being greedy.  It was simply not the way I was raised–not with parents who were children during the Great Depression and teens during WW2.

I will admit that I have, in my adulthood, a weakness for “stuff”–but usually, small stuff, not extravagant things.  It’s something I’m continuing to work on, in the back half of my life–just because a thing exists and I can afford it, it does not mean I should buy it.  I have certainly been able to curtail–mostly–my desire for buying clothing during the pandemic, aside from a handful of special items (and socks and underwear).  I’ve also purchased a couple of very special pieces of jewellery, cognizant that there is so much I have that I barely wore even before the pandemic. I don’t really buy doodads that just sit on a shelf any more. I have put money into embroidery supplies, but that is precisely the kind of activity that, in my mind, increases virtue–but even that can go too far, and I need to keep an eye on it.

I don’t really need more Christmas ornaments, either, but I purchased this year’s installments of three out of the four series I collect (and may look for that final one online after Christmas).  Why?  Glad you asked…

There have been many Christmas trees over the years.  There was the tree of my childhood, with its colour-coded branches inserted into a wooden trunk.  There was its successor, where vertical swags were hooked over a disk and a framework of hoops.  There was also the little plastic 4′ tree that sat in our family room window and was initially a “themed” tree with red and white ornaments, but gradually lost its theme over the years.  My own first tree was also a 4′ tree.  We went through a 6′ tree purchased at a Zellers that was a little scraggly, then into a large, fluffy 7′ tree purchased when we moved into the Black Dr. house, and now, the pre-lit tree we’ve had now for two years.  But the framework itself didn’t matter.   The trees I have had were grown from the seedlings of those trees of my youth, and the fruit they bear–the ornaments I cherish–tell the story of my own life, going back to its roots. 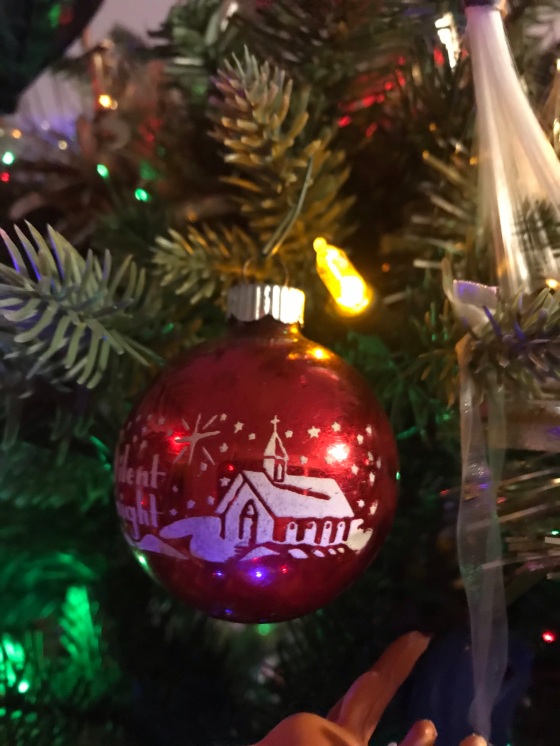 It begins with the traditional first ornament to go onto the tree: A vintage Shiny Brite ornament, likely dating to the 1950s.  It belonged to my parents, and is special to me partially because “Silent Night” reminds me so much of my mother.  It was her favourite carol, and I know she looked forward to the candlelight Christmas Eve service every year where light would be passed down the pews to hand-held candles, and the lights would be dimmed, and the entire congregation would sing, unaccompanied in the final verse.

There are other vintage ornaments on the tree, too.  There are a few other ornaments passed down to me by my parents (I am particularly fond of the pink Chinese lantern):

Others come from a box of vintage Shiny Brite ornaments I purchased a few years ago):

And then, there are the cheap plastic ornaments–reacquired from eBay–that are identical to those–now long lost– that once graced our Christmas trees in the 1970s: 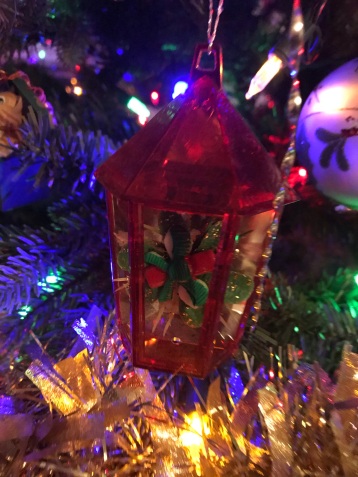 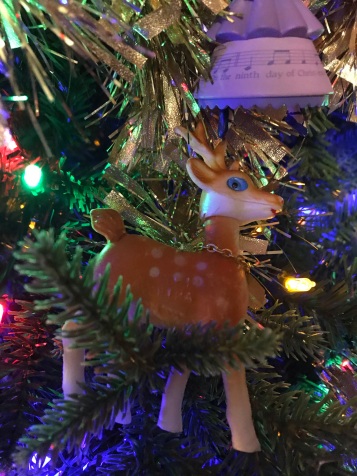 In 1975, an older cousin of mine began purchasing Hallmark ornaments for me (and her mother often presented an ornament to my mother as well).  We’d get them at a New Year’s Day gathering.   Here are a batch from the late 70s and early 80s (the 1976 Christmas Tree spinner ornament has disappeared on my tree and will likely only be found once I take it down).  I am particularly found of the stylized Three Magi ornament, and always try to locate it near a blue light: 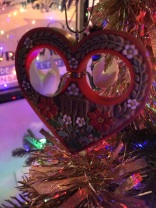 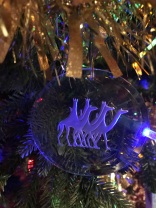 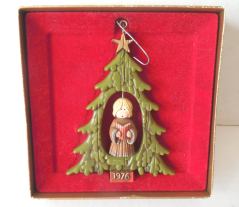 In 1980, I began to collect my own ornaments, starting with a Hallmark series called Frosty Friends, featuring a stylized “Eskimo” figure with various woodland creatures.  In the late 90s, I sold some of the earliest ornaments for hundreds of dollars.  I kept a few of them, including one involving hockey and another involving a pool table, and Hallmark is still making the series–but they’ve gradually become ornaments I don’t put up any more now, as I no longer find cartoon racial stereotypes to be charming.  However, I did collect some other fun ornaments during the 1980s that I still put on my tree every year.  The funky blue asymmetric ornament was purchased at the old Lazarus department store. The ball that reads “Peace” dates from my time at Ohio State.  The glass bird was from a visit to Ohio Village with my first boyfriend and his family.  The purple:  Just me in my early teens. It was my favourite colour at the time: 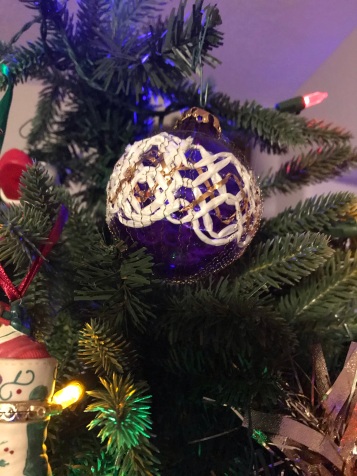 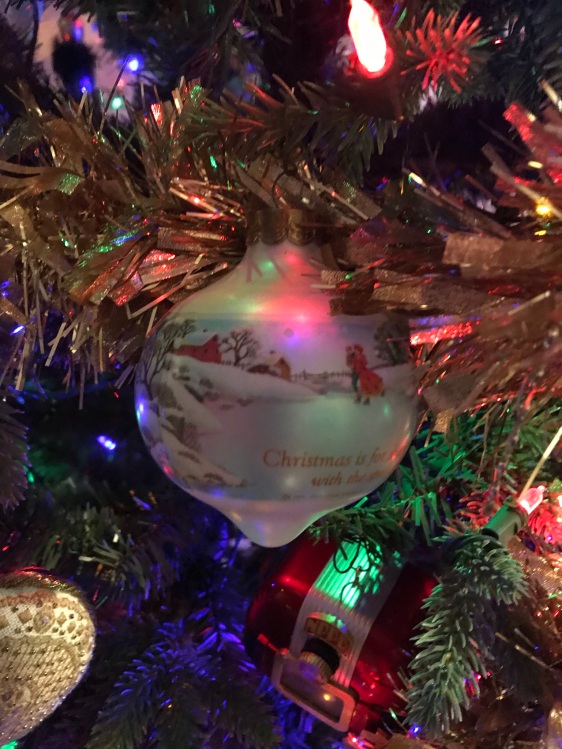 This one is special.  It is the “First Christmas Together” ornament my parents got my husband and me in 1991.  But it isn’t actually that exact ornament–a cat knocked over our little Christmas tree a few years afterwards, and I purchased this replacement from a Hallmark ornament dealer (the one, in fact, that I subsequently sold most of my Frosty Friends collection to).  It’s subsequently survived a number of cats, although I now know better about monitoring the cats and keeping fragile ornaments away from them.

And now, because WordPress seems to be balking at uploading more photos at the moment, I will hold Part 2 for tomorrow.   It’s raining right now, but soon enough, we’re expecting a change over to snow.  It’s the least 2020 could do for us.