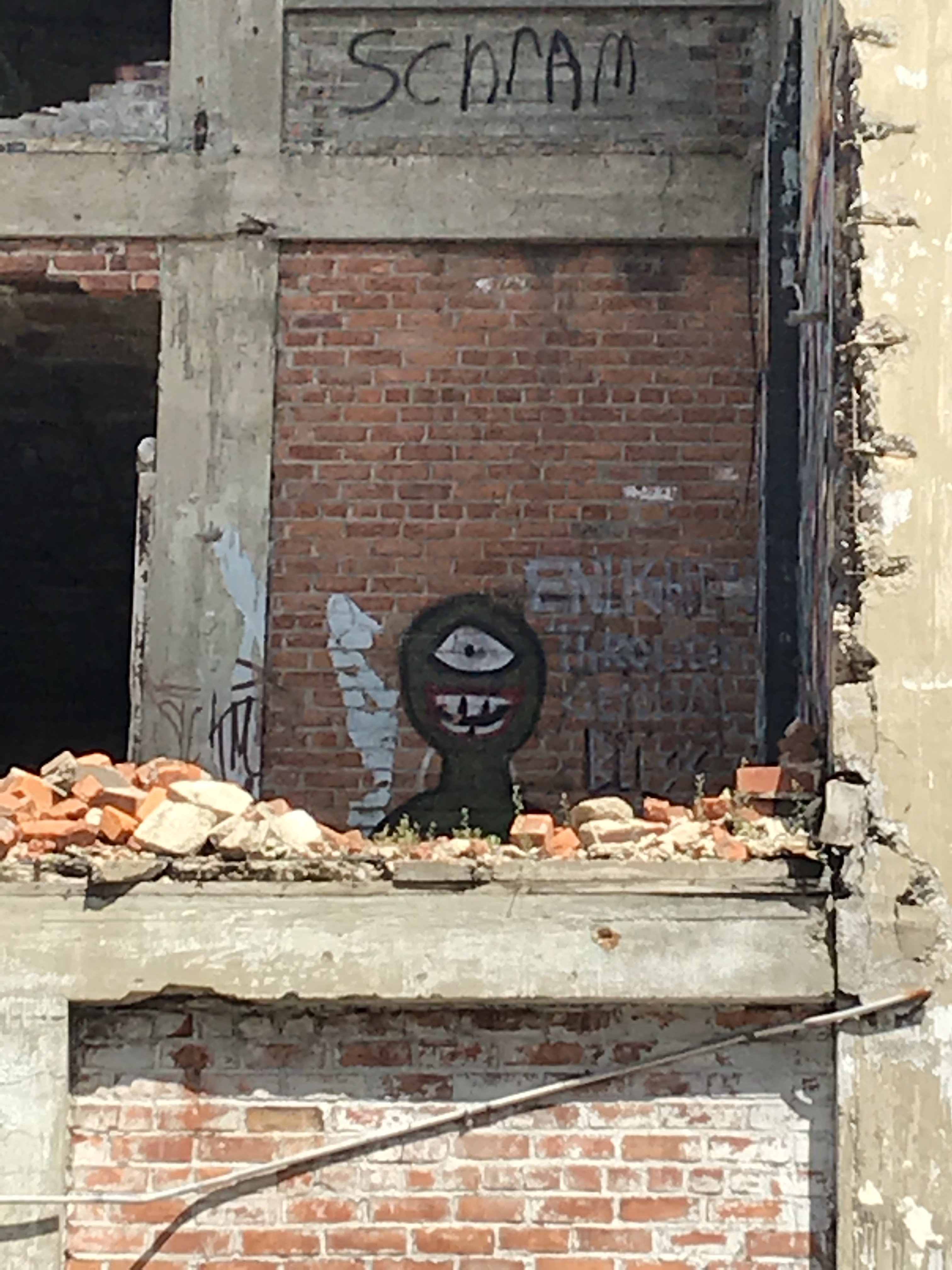 Today’s Daily Stoic writing prompt:  Can I find grace and harmony in places others overlook?

For many years I have been attracted by ruins–both ancient and modern.  I date this fascination back to a specific event–seeing a film in the eighth grade about Ellis Island.  At that time, this famous processing station for over 12 million immigrants to the United States was derelict and abandoned.  Where once spaces bustled with the energy of those arriving in the United States seeking a new life, there was only dust, broken glass, and silence.  Abandoned equipment littered the rooms where once decisions were made that would change lives, for better or worse.  In subsequent years, others saw the importance of this place and decided it was worthy of rescue–not to its previous function, but as a physical narration of an important story.  A ruin provokes questions:  What was this place?  Who came here?  What were their stories? What happened here?  Why was it abandoned?   All ruins provoke that dialogue with those who see them.   Some see decay, and blight, and ugliness, but I see the spectres of what once was–the ghostly outlines of decrepit buildings standing as what they once were.

Sometimes there is hope in ruins–I have seen so many of the abandoned and vacant houses and buildings in Downtown Detroit–those that managed to hold on–be born anew by those who saw those same shimmering images of the past and worked to bring them to solidity.   Sometimes, the hope is fleeting, though, and the ruin can only attest to a history that threatens to fade into memory–as may happen with the Packard plant I got to tour two summers ago.  But always, there is grace there, for those who remember, who know to tell the stories.  And sometimes–as happened in Louisbourg–almost all traces may be erased, only to live on in windswept, empty sites, until they are once again discovered and brought to life again–physically, or even virtually.

*****
Speaking of spectres (or Spector)..
James Fell, a historian I’m following on Facebook, had this insightful statement (speaking specifically about Winston Churchill, but also referencing recent problematic authors such as JK Rowling and in light of the death of Phil Spector):
“Everyone is flawed. Some aren’t just flawed, they’re evil. We should not praise people as heroes, because we will always find reason to be disappointed, crushed, or aghast. However, we can praise heroic acts. Admire the deeds you deem worthy rather than the person behind them. Alternatively, feel free to say fuck that guy and cancel them from your life. No one is owed your admiration. No one.”

*****
And speaking of spectres, I just finished up watching season 2 of His Dark Materials. It only went to seven episodes as a planned eighth was cancelled due to the pandemic.  It did tie things up fairly well to the end of the second book.   The eighth episode was allegedly the “What was Azriel up to?” update, so perhaps they will still be able to film it. However, I am expecting all of this to be delayed, although the final season is going to have a LOT of CGI, based on what happens in that final book.

*****
Today’s embroidery was focused on the cuffs and lower sleeves.  I’ve ordered more of my two shades of white as I don’t think I have quite enough to finish the work if I fully fill in the shirt.  I am hoping between what I still have of the white, along with work on the dark pants, I’ll be able to keep going until the thread arrives.  (I’ve opted not to do curbside pickup this time, since it’s really not an essential trip, and if I have an option that avoids that, I will take it. ) 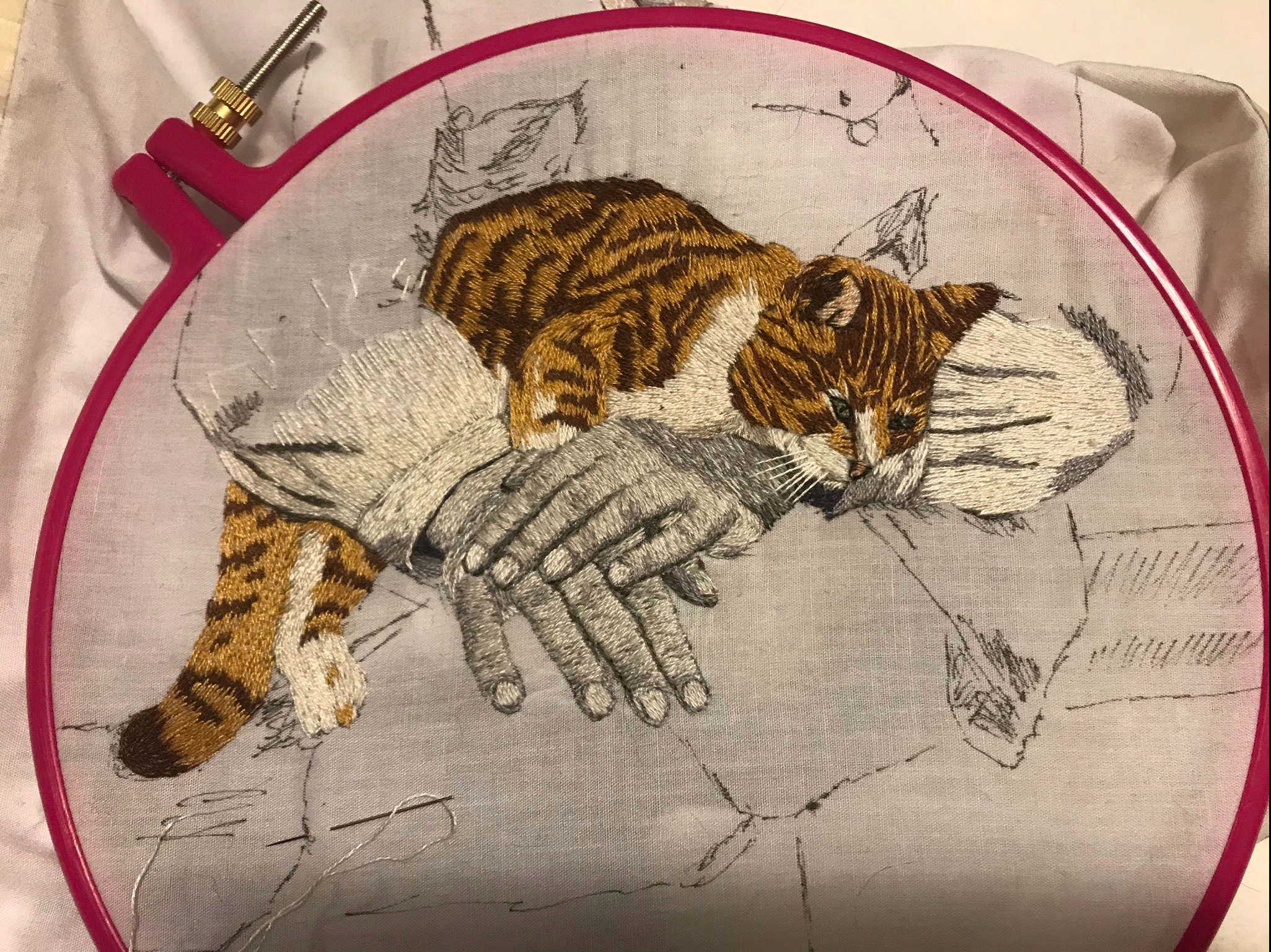 *****
And the countdown continues.  The US Presidential inauguration is in just under 38 hours.