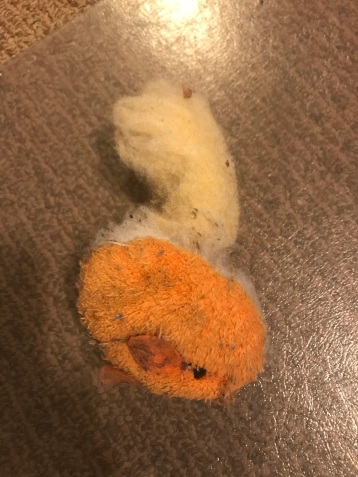 I have a tendency to procrastinate.  I often do my best when up against a deadline that is imminent.  Usually, my time management skills are such that I know about the right time to start in on a deliverable that’s due soon, but sometimes that can mean I do not do as thorough a job as I might do and settle for “good enough.”  This morning, though–even before I read this journal prompt–I got down to working on two projects first thing.  I had the first–a decision tree for project initiation–done in about 45 minutes.  For the second, starting early on a document for a Teams training session meant that I realized that there were certain screen shots I really needed to get from a real meeting, and it just so happens I had the perfect meeting (where I’m mostly listening) at 11 am.  I’m now in a great position to start assembling the document later this afternoon.

*****
The cat toy in the photo at the top, a catnip hamster purchased from Falcon’s Mew at Pennsic at least four or five years ago, has finally gone to the Great Beyond after being disemboweled by Furiosa.  For some reason, it was long one of the most favourite cat toys–I remember in particular Victoria liked to carry it around and announce to the world that she had prey.   It does make me a bit wistful–I am not sure when, or if, I will go to Pennsic again.

****
On this day 115 years ago in St. Petersburg, imperial Tsarist troops fired on unarmed demonstrators in Palace Square who were marching to present a petition to Tsar Nicholas II, an event known as Bloody Sunday.  It led to the first of the Russian Revolutions.  The Tsar, hearing about possible unrest, had left the city, but was still blamed for the resulting massacre of perhaps a thousand people. It kicked off a series of general strikes which were brutally repressed, resulting in thousands of additional deaths or imprisonments.  Most importantly the lower classes lost confidence in the Tsar, who they had mostly seen as a protector.

Eight days and 67 years later, another Bloody Sunday took place in Ireland, where British soldiers shot 26 Northern Irish civil protesters, many of who were attempting to flee or render medical aid.  This was one of the events during the earlier years of the Troubles,  which lasted from the late 60s into the 90s, and which the rest of the world knew as the Northern Irish conflicts.  These were essentially clashes between Northern Irish Catholics (often associated with the Irish Republican Army, or IRS, or other paramilitary groups) and Protestant paramilitaries loyal to Great Britain.  The British army often intervened on the Protestant/loyalist side.   It included deaths in peaceful demonstrations as well as terrorist attacks, with over 3500 casualties over the thirty or so years of the conflict (which finally concluded in 1998 with the Good Friday accord).

Interestingly enough, there are 15 other events also known as Bloody Sunday, but these two are likely the most famous.  Both of them inspired music that I love:  The Russian Bloody Sunday inspired Shostakovich’s 11th Symphony, which I’ve written about before (and, of course, listened to tonight).  And the Northern Irish Bloody Sunday led to “Sunday Bloody Sunday”, recorded by U2 just over ten years after the events it describes.  This is one of the songs that made me a fan of U2.  The video below pulls no punches.

*****
I received my order of silk thread today from Gitta’s, so I decided to take a break from embroidering pants and to go back to the shirt on my project. I haven’t posted updates for a couple of days, so here are a pair of photos.