Today’s Daily Stoic writing prompt:  What do I truly prize?

There’s nothing like living in a time of crisis to reemphasize what is important to me, but more importantly, what impact that has on my actions.  I remember sitting in concerts wondering how I would feel if I lost the agency to attend such events at will.  I had been, of course, thinking of how I would feel if I lost that agency, not really ever considering what would happen if society as a whole would suddenly lose the ability to even present such concerts.  So that “fear of missing out” never really materialized in the same way.  What I learned is that what I really valued most was the ability of our society to be able to present concerts–to support musicians and artists.  And I loved the energy of the live performance.  I learned that it was possible to still support the former in the hopes that in the future, the latter could be reality again.  I learned an important thing about myself, too–no matter what it is, part of the joy I take in an activity is enabling other people to enjoy it, too.  That applies no matter what the activity is.

It’s that sense of community–people coming together to enjoy a thing together, or to accomplish something that they could not accomplish on their own–that moves me the most.  And as I look back at 10 1/2 months of lockdown, I find that an important part of how I have coped with this is in partaking in group activities in ways we’ve been able to find to bridge us through this crisis.  My friends are also mostly united in doing whatever it takes to keep each other safe.  I know they’re all out there–I see many of them on Zoom from time to time, or on social media–but I’m understanding what a gift simply being able to sit in someone’s living room with a group of friends over a game or good food truly is.  I do think there will be much making up for lost time by (hopefully) the end of this year, although there’s always that worry that if I were to host a gathering, no one would come because everyone’s calendar is going to be so stacked with social events that mine would be lost in the shuffle.  But this is a small worry in the grand scheme of things.

*****
I am prepping for a Toastmasters contest tomorrow. I’ll be representing my new club in the International Speech contest, and this year the prep is very different from the last time I competed.  I’ve checked out the plug-in webcam with my tripod and made sure I’ll have a spot with a plain background to use as my speaking area. I’ll be standing, so I’ve marked out where to put the tripod and fired up a Zoom meeting to make sure the lighting is good.

I’ll be reprising a speech I did awhile ago on “Adventures in Stoicism”, based on my experiences doing these daily writing prompts.  I don’t really expect to win, but it will be fun to compete again.

Embroidery continues to progress.  With plenty of supplies now in hand, there is no need to play thread chicken, and I’m tackling the great (mostly) white mass of the shirt now.  However, it’s more complex than it probably looks on first glance–I am actually using two shades of white.  I have zoomed in on a portion where I’ve made my first pass with one of the colours to show what the technique looks like–it’s a long and short stitch type of fill, and I first start with the slightly cooler of the colours and then fill in with the warmer.  I am probably another day or two’s work away from finishing the shirt, then it’ll be back to the pants and then finally, the bench.  The background will be painted or filled in with markers–I’ve just ordered a set of greys from Zulily to give a try–with possible embroidered highlights. 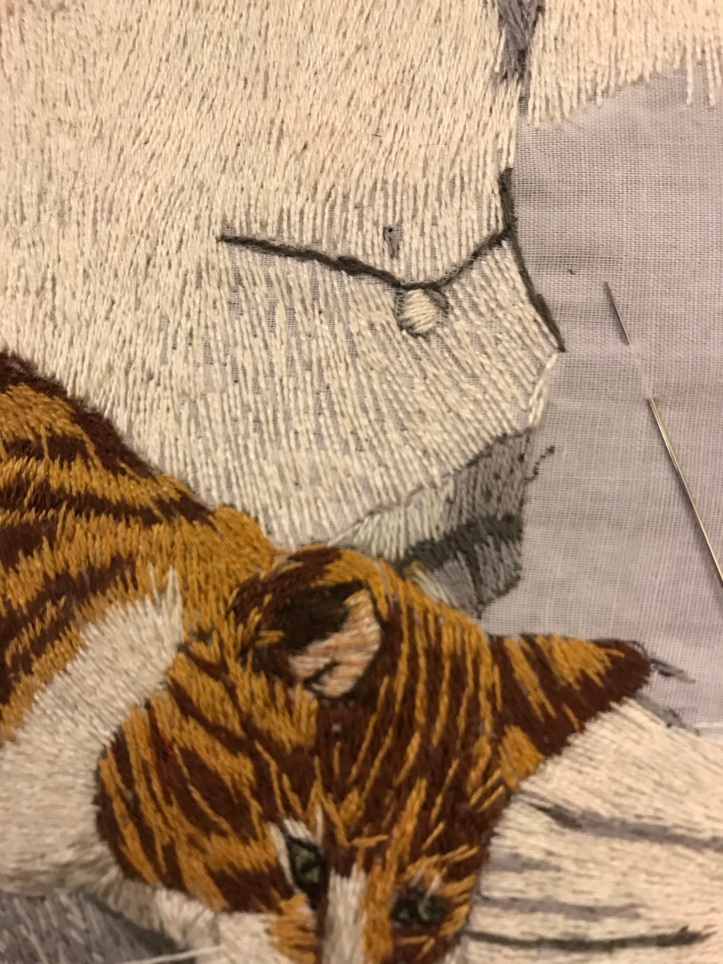