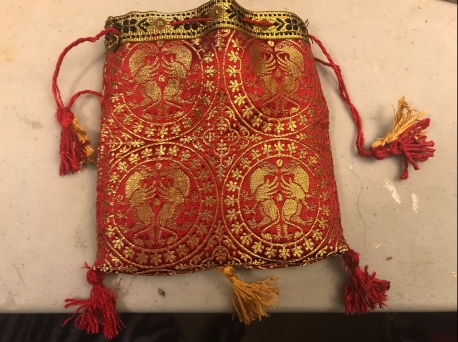 I’m finally getting a chance to slow down and think this evening.  Most of the day, I’ve had my head down in crafting things.  First, it was creating the journal cover for the gift exchange I’d finished up the embroidery for yesterday.  That involved a couple of tweaks along the way–I wanted to make sure the pattern of the fabric centred up, and then I remembered I needed to allow extra space to let the journal covers slide in.  Next was an alms pouch of the same material.  I debated cutting apart an old pouch to scavenge the cords and tassels, but ultimately figured out I had enough silk thread to construct them.  I then took a pause to work on my RPG character, then we had our gaming session (where we leveled up,  finished the module we were doing and then started working on moving our characters over to the new platform we will start with next week.)  I also finished up the alms bag in the first hour we were playing.   So nope, not much time for philosophy.

Today, I don’t need much healing, since creativity and this kind of problem-solving tend to give me energy.  But I am able to reflect on the weekend.   I’ve cleared the deck of most of my current projects over the last couple of days–finishing the large embroidery as well as the exchange gifts, and finishing out War and Peace.  I was also able to give some editing feedback to the friend I’ve been working with on her manuscript.  And reflecting on what I’ve done is rejuvenating. It’s a new week and a new month coming up.  I have a new book to read and an illumination project, plus I can get back to the marginalia cats.

So I’ve resumed a run-through of the Shostakovich quartets I started yesterday and continued today as I worked away on my projects.  I’m listening to the ferocious portion of the 10th right now.  Earlier today, I actually listened more carefully to the 7th and I think I have a better appreciation for it now.

What I haven’t done today?  Listened to any news.  At all.  And I’ve barely browsed Facebook.  Instead, it’s been all music, creative things, and enjoying a game with friends.  And returning to ponder this is making me realize that I focused today–and most of the weekend– solely on things under my control, things where, barring significant disaster, I had removed the dependencies on outside forces.