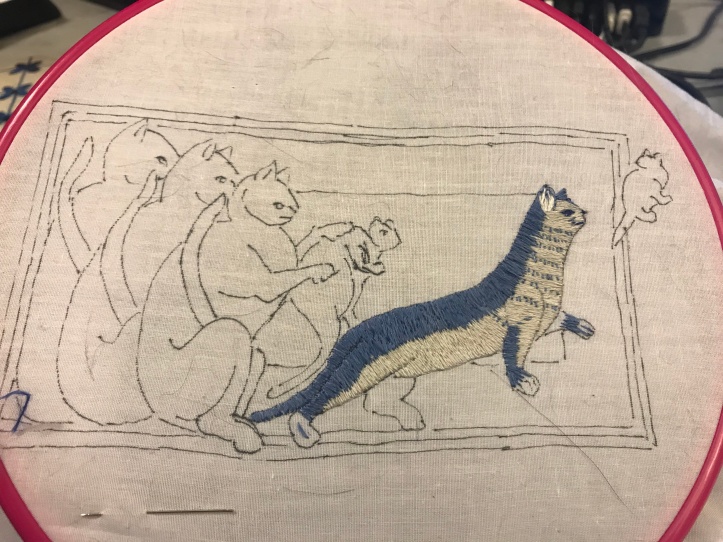 The associated meditation for today clarifies what this means:  understanding that the mind is not powered by philosophy alone, but is part of a physical organism, one that has actual needs that need to be met.  Likewise, your mind itself cannot simply will itself to do or not do certain things.  Understanding how both mind and body work are crucial to understanding just what things are able to be controlled (or influenced) by mindful actions.

So yes–particularly this year–I do feel like I’m keeping watch.  But it’s something that has always fascinated me–part of my apparently innate curiosity about how things work.

After trying out the blue Splendor silk on the current embroidery project and being dissatisfied (the blue was too dark), I realized in my stash box I had some Eterna silk in just the right colour.  So I’m using it with two strands.  It’s still more fiddly than I would like with my rough hands, but the colour is so perfect and the sheen is so lovely that I’m dealing with it.  One of my embroidery kits from Zulily arrived today as well.  And I’ve trimmed the pattern for the vest that these cat embroideries will be going onto.  I have a five-day holiday coming up starting next Thursday, and I am hoping I may be able to finish the entire project.

I’ve been spending the evening going over the blog posts for the Ethereal Seamstress competition I am judging tomorrow.   I have my judging sheets ready, and am looking forward to seeing the finished products.  Three of the projects I’m particularly excited about seeing–I’m rather stunned at how much the entrants have accomplished.

There will also be another Shostakovich viewing party tomorrow morning, which should be a whole lot of silly fun out ahead of the garb competition.

And if that were not enough, it looks like I’m getting sucked into a D&D campaign, and will likely be putting a character together tomorrow evening.  I already have the basics of what I want (catfolk rogue, so going a different direction than the current alchemist elf) so it’s just a matter of learning a somewhat different character generation system.

All this with feeling dopey all day–took awhile to get to sleep last night (although I did finally make it) so I’ve been feeling a bit zombified.  I’ll also be running over to Lime Ridge Mall to pick up some takeout food before we go into grey again on Monday.  Going grey meant we’re shelving reopening CWH again for awhile.  However, apparently the lack of people around has allowed staff to get a ton of maintenance done on the aircraft, so if we can get past all of this hopefully there will be a decent flying season.  The 50th anniversary book is apparently back on, so I may be sharpening up my editing pencil again shortly.