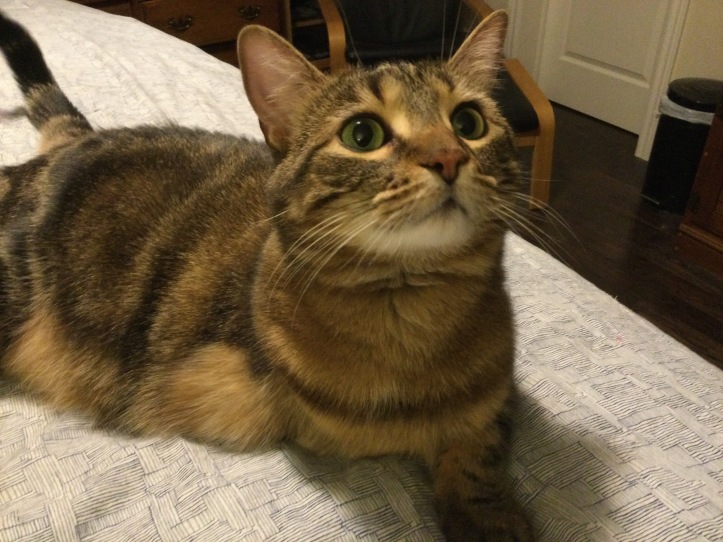 Today’s Daily Stoic writing prompt:  Why do I care so much about impressing people?

Because, unfortunately, the world runs on a “who you know” model.  Making an impression is so much a part of the job interview process that it’s one of the skills we teach in Toastmasters.  Employers are looking for “fit” with their teams, and people like to work with people who seem to be like them.  Is that patently unfair? Yes.  Do I wish it were different?  Yes, again.  It’s particularly hard for people with introverted tendencies like me, who so often put on a mask of extroversion for these occasions.   Other people can be gatekeepers of knowledge and power as well, and to willfully pretend they are not is to deny reality.   I think the best we can do is to try to base the impression we’re trying to make less on externals (clothing, signifiers of wealth, etc.) and on the genuine positive qualities we possess.

*****
Embroidered away on the cats today.  Wrote a post about men’s hosen for AskHistorians.  We’re now in the homestretch for the April 1 Letter of MisIntent, and I managed to get a volunteer for some of the remaining graphic design work.  I don’t think this letter is quite as good as last year’s–I got into the theme of Literature and Literary Characters much more than I am with Cartoon Characters–but I did managed a handful of good submissions and a few other people chimed in with enough to make a good letter.  (I was hoping for Science! as a theme–maybe next year).

Oh, and fun bit on the radio “The pandemic is now completely out of control in Ontario.”   You know, I’ve tended to not comment on this stuff much here lately, but I think everyone knew this was coming in mid-February, because the Ontario government still thinks it can negotiate with the virus, have schools open with not enough distancing, and ignore the big outbreaks in workplaces.  They are putting all of their eggs in the vaccine bucket.  Maybe this “opening up” would be OK if we were in the States, where they’re a couple of months ahead of us on vaccinations, but we are not them.  Still, it does not change what I’m doing.   I do not need a haircut or a tattoo right now, even if the government says it’s OK.

I have five days away from work starting Thursday.  I’m going to spend the time embroidering, gaming, feeding some long-anticipated Shostakovich research material in Russian into Google Translate, and hopefully I’ll get out for some walks.   We are definitely going through another of these periods where if I listen too much to the radio I’m going to fall into an existential dread rut again, so I’ll try to spend more time with music and silence rather then hearing the hourly (or more) doom.

On the other hand, the big container ship that was stuck in the Suez Canal has been freed, so there’s some modicum of good news today.