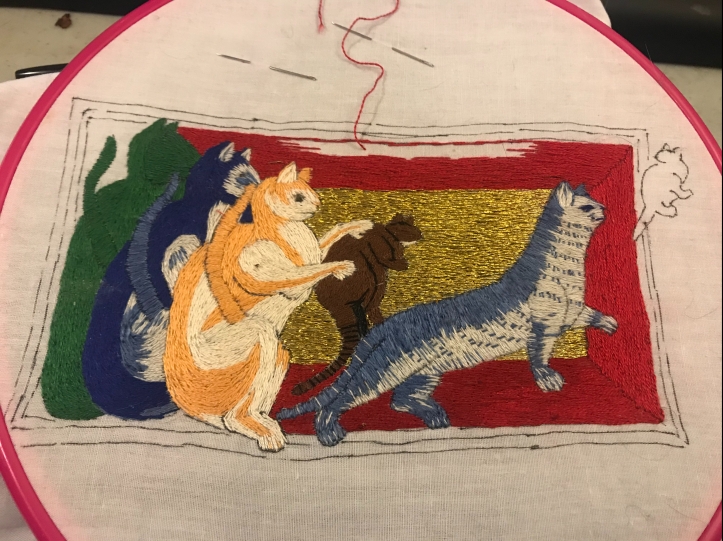 This one made me think.  Back when I started grad school, I made an assumption that there would be positions available in my field when I finished my PhD, because we were being told of all of the imminent retirements that would be happening over the next ten or 20 years.  That was true–but what what wasn’t was the belief that all of these positions would be replaced by equivalent tenure-track positions, or that perhaps these positions would even grow.  I had started to understand this towards the end of my studies, which is likely why I made the pivot as quickly as I did to the non-academic world.

But I learned something, and that was planning for the future based on the world of the past was not a good technique.  You can’t wish things into being, as much as you might want to.

*****
Moderated a wonderful panel tonight for Toastmasters.  Worked a little on my embroidery, which creeps ever closer to completion.  Read three Shostakovich articles (and started a fourth, which I’ll likely finish shortly) in a book that just arrived today, meaning I have four books on Shostakovich going simultaneously.    Add to that reading the first chapter in Jenny Lawton’s Broken (in the best possible way) and one might think I was spreading things around a little thin.  Luckily, the articles were short reads; two involved Shostakovich’s letters–to his mom (which were charming) and to Stalin (which were very official-sounding).  That latter one raised the theory that the famous 1936 denouncement of Lady Macbeth was partially meant as a way to get Shostakovich to do more film music (Stalin really liked the promise of cinema as a propaganda tool) and that the equally-famous decrees against formalism in 1948 were at least partially because all of the composers mentioned in the decree were doing very well financially, having received numerous prizes and the like, but some were in debt nonetheless.  Interesting.  I’m just about to read an article on the Western response to Symphony no. 7.

I also had the fabrics dropped off that I purchased from a friend’s enormous find of more-or-less abandoned fabrics from the logistics company she works for.  They’re splendid–gorgeous suiting-weight wool in navy and charcoal as well as some nice satin lining material in a rich gold.

It’s the first day of the stay-at-home order.  This time, they’re apparently actually blocking off non-essential items in stores.   While I still do not think this does not address the key need of paid sick leave, at least now teachers are being included in priority groups in hotspots for vaccination (the only question there:  is it based on where they live, or where they teach?)

The one thing I wish I’d been able to do today is walk outside.  It was close to 20 degrees.

Time to finish this piece, shut down the computer, and go read some articles.  And maybe another chapter or two of Lawson’s book.  I