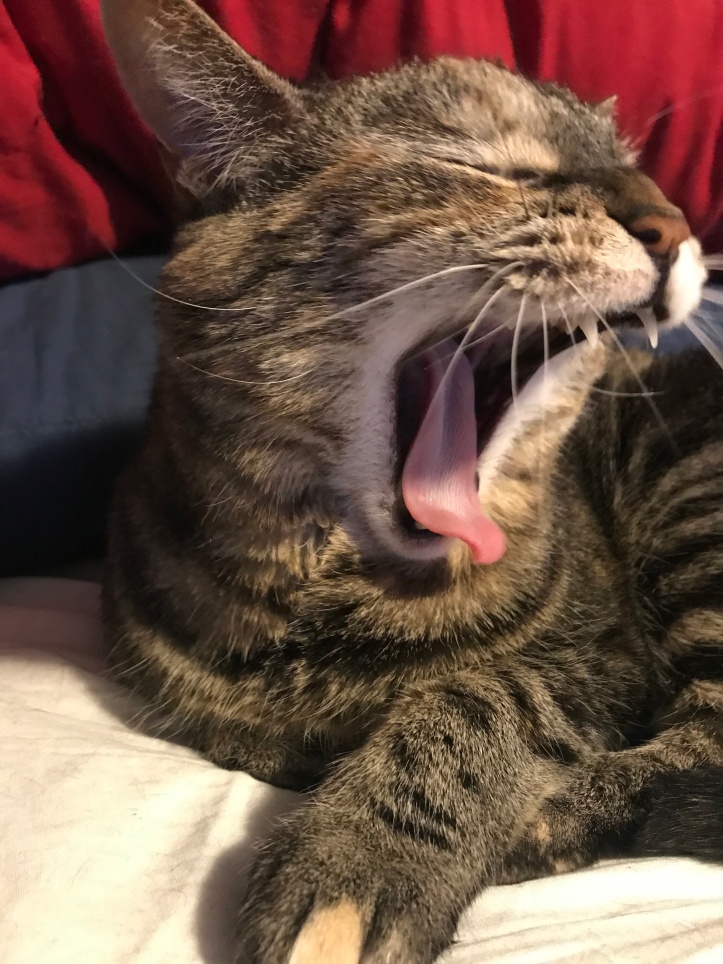 For the most part, they do–but what is sometimes lacking is degree.

I want people to understand.  I want people to burn with enthusiasm as I do.  I know that most people won’t necessarily be able to or want to go where I want to go.  So I endeavour to meet people where they are, and I think usually I’m pretty good at being able to look at things from another perspective.   But there’s a point where I bend back in upon myself, congratulate myself on my effort, and move on.

And that’s the problem right there.  I feel a little out of balance.  I have a strong moral compass. But a compass isn’t very useful if it doesn’t guide you to get somewhere, to taking action.  And too often I feel like I am collaborating with the enemy just enough to make life easier for myself, and that I need to stop staring at that compass and congratulating myself for having it  and actually get up and do something.

I do not say this to gain sympathy, or to elicit praise.  It’s actually this out-of-balance feeling that is pushing me to continuously work to improve.  I aim very, very high.  But I am acutely aware of my human frailties.  I sense my blind spots, and stumble into one now and again, and find myself feeling my way out.

Life is complicated.  There is no easy answer.  But there’s only one way out of it all, in the end.

That’s a term I use for when I consume a book in a single sitting, or perhaps two.  It’s precisely the same feeling when I completely immerse myself in a project, committing myself completely, physically and mentally, to that one task.  There is no feeling like it.

The book is Darmon Richter’s Chernobyl: A Stalker’s Guide.  I finally ordered it on Monday, the 35th anniversary of the disaster, and it arrived this morning.   I own multiple books on the topic, both text and photos, but none have captivated me quite like this one.  There are a couple of reasons for that.  First of all, straight up, the photography is gorgeous.  Richter’s camera finds beauty everywhere, and he knows how to use light effectively.   This is true no matter what he’s photographing–he seems to find a sense of place whether it’s an abandoned building, a scene of natural beauty unbroken by signs of the disaster, or the humans who wander through today’s Exclusion Zone.  And that’s the second strength of this book:  The narrative itself.  Had this been a book merely of photographs, I would have flipped through it in an hour or so and shelved it.  Those photographs are accompanied by some of the best travel writing I’ve read.  Each of them is part of that narrative, which tells the story of the Exclusion Zone as it exists today and the people who go there, whether they are official tour guides, unofficial tour leaders known as “stalkers”–who sneak explorers into the off-limits areas of the Zone, scientists (in Belarus, you can explore their part of the Exclusion Zone with scientists who work there as your guide), those scattered people who actually live in the Zone, and finally, those who still work in the Chernobyl plant itself (over 2500 of them).   This brings what many assume is a dead zone into vibrant focus.

Richter opens by mentioning that there are two Chernobyls:  an event and a place.  He’s interested in the second.  There’s only a cursory description of the disaster itself or its immediate aftermath.  But he does put the building of the plant into its historical context, noting the the choice of the now-notorious RBMK reactor was driven by the desire to produce material that could be processed for nuclear weapons, with the electrical generating capabilities of secondary interest.  Richter spends considerable time discussing the foundation of Pripyat as really the first open atomgrad, or atomic city–all of the previous ones being closed, top-secret cities which were often simply numbered.   Pripyat was a well-planned, new, sparkling city with many amenities, often with imaginative artwork or decorative motifs related to the fact that the majority of its adult residents had moved there specifically to work at the plant in the nuclear industry.  Prometheus, in particular, was a favoured subject.  Some of the most evocative images are of the town’s cinema, which once had a statue of Prometheus in front (now moved to near the plant) and featured a gorgeous stained-glass window.   Richter mostly resists the kind of Pripyat kitsch that has become commonplace–the discarded dolls or gas masks which by now have been rearranged or posed so many times that they have lost what significance they might have had.  Instead, Richter sees the town as a discarded Utopia, a kind of museum of Soviet architecture frozen in time.  He photographs the front of the police station, a bus stop, a kiosk with posters still intact, and in particular the artwork that decorated the town, which has a certain unity in feel (because the town was built all at once) that is rare elsewhere.   If you have a fondness for that kind of Cold War-era Soviet architecture–and I do–there is an attention to detail and to the feel of the city that I’ve found mostly absent in previous works.

Richter also talks about the fact that the Chernobyl disaster was in fact the third 20th century disaster to impact the area, after the Holodomor and the substantial massacres of Jews during WWII (the town of Chornobyl had a substantial Jewish population, just one of many in the area).  Neither of these are remembered by monuments, of course, but the region’s now-forgotten war memorials are another poignant subject.  He even travels into the still-fiercely contaminated Red Forest area to see one–and is overwhelmed at how beautiful it is, even though the dosimetres make it clear that to linger too long would risk dangerous levels of radiation.  There is one particularly evocative photo he takes just before he leaves, when he turns around ad realizes he can see the plant, with its New Arch structure gleaming, through a gap in the trees.  In contrast, while touring Belarus’ portion of the Exclusion Zone, he finds that the monuments there are well-tended–perhaps because the Soviet Union is better remembered than in Ukraine.

I also learned about the enormous Duga-1 receiver array, which in its heyday scanned the skies for Western nuclear launches.  “Beginning in July, 1976,” Richter states, “the transmissions from Duga-1 could be heard in the 5 to 28 megahertz frequency range, a short, sharp tapping noise that led shortwave radio hams in the West to nickname the unidentified source the ‘Russian Woodpecker.'”  The structure near Chernobyl was the receiver;  the transmitter was in another “closed city.”

In a chapter devoted to touring the Zone with a “stalker” guide, Richter is able to convey a lot of the sense of how few people now inhabit these lands, and how much nature has taken over.  The amount of radiation they encounter during this trip is strikingly small–Richter’s guide mentions that he has learned over the years to know just which areas are “dirty” and to be avoided.

The book also had some interesting things to say about tourism to the area.  Richter mentions that the rather public incidents of “influencers” doing photo shoots supposedly in Pripyat have turned out not to have been shot there.  Locals seem not to mind;  many of them profit off of the tourist trade, in one way or another.  Pripyat is, after all, a city that was evacuated of its residents relatively quickly (although individual buildings continued to be used into the 90s, and there’s still a working power plant and laundry there)–it’s not a gravesite.  The fascinating-to-me part is that there are now tours available of the plant itself–even into Control Room #4 now, where it all started.  Richter was able to get an “under-the-table” tour of off-limits areas–including into the area now enclosed by the New Arch, which contains the Shelter Unit (known more popularly as “the sarcophagus”).   There, preparations are being made to completely seal off this area and for robots to begin to dismantle this original containment structure.  Once the Shelter Unit is breached, no humans will ever see this giant enclosed space directly again, as the process of active decontamination of the site begins in earnest.

This is a deeply moving book.  I doubt I’ll ever get to tour the Exclusion Zone, although, given the chance, I’d jump at it.  This is the next best thing.  It might even be better.