In August 1979, I was on the cusp of starting my first year of junior high.  I was a pretty happy kid that summer.  Sixth grade had been a lot of fun–I had good friends, had had an outstanding sixth grade year, and had one of the best vacations of my life.  In the midst of the full bloom of my obsession with horses and horse racing, we’d visited Kentucky, where I’d gotten to meet the famous Secretariat, visited Kentucky Horse Park, and finally, seen Churchill Downs, home of the Kentucky Derby.  We’d seen the track itself and gotten to tour the barns on the backstretch.  Mom found a kitten there, and I captured a precious shot of her on my 110 camera.  My dad took the photo of me with horse memorabilia in the hotel room in Louisville. 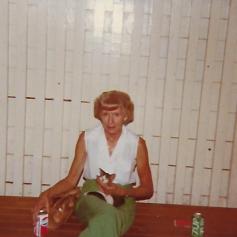 I’d become a horse racing fan in 1977.  I could remember watching the Kentucky Derby every year on my grandmother’s black-and-white TV, but it was in 1977 that I was captivated by Seattle Slew and his Triple Crown-winning run.  By the time 1978 came around, my grandmother had just died.  We watched the Derby at home on our colour TV, and I became a fan of Affirmed and his young jockey, Steve Cauthen–although it was really mostly about the horse.  I cheered him on through the Preakness and the Belmont as he dueled with the great Alydar, particularly in the famed Belmont race where the Triple Crown was decided by a nose.  I made a good-luck token to carry from a picture of him in Sports Illustrated.  My walls were plastered with articles and magazine covers about the races.   I dreamed of being a jockey; satin jackets were popular in 1979 and I liked to pretend I was one.

It took forty years, but I eventually got to suit up in racing silks. 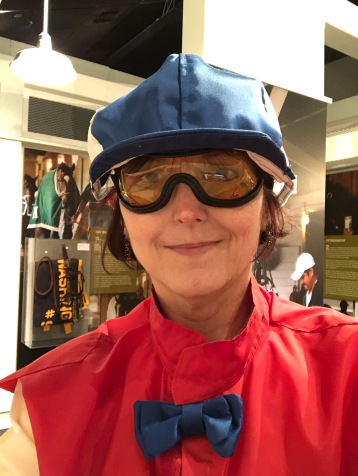 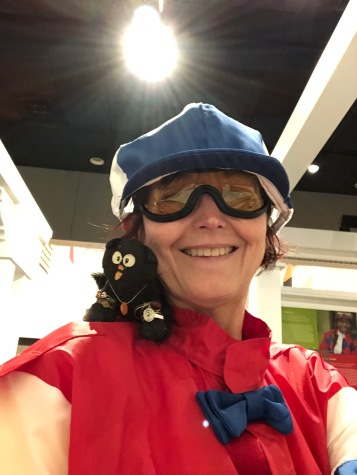 I realized after overnighting with friends in Louisville that there was no other place in the area that I needed to see (again) like Churchill Downs.  Since my first visit, a whole museum dedicated to the Kentucky Derby has been built, full of memorabilia and displays (like the racing silks that I got to don above).  I no longer follow racing to the degree I did for about four or five years during the late 70s and early 80s, but I’m still a fan, and was overjoyed when American Pharoah finally won the Triple Crown again in 2015, having followed the futile campaigns of Big Brown in 2008 and Smarty Jones in 2004.  I was thrilled when Justify won the Triple Crown just last year, but subsequent stories regarding failed drug tests before the Derby that should have disqualified him were disheartening. Horse racing has always had a shady element in evidence, but recent deaths of a number of horses at Santa Anita have added extra tarnish.  The sport is troubled.  Pimlico Racetrack, home of the Preakness, is badly in need of renovation and is limping along outside of the Preakness.  And this year, for just the second time, the Kentucky Derby winner was not the first horse (Maximum Security) that crossed the line, but the second-place finisher, Country House, after Maximum Security was found to have impeded several other horses and was dropped to 17th place, behind the last of the horses that were affected. (At least no drugs were involved, as was the case when Dancer’s Image was disqualified in 1968, awarding the victory to Forward Pass).  Country House was the second-longest shot ever to win the Derby (note the payout on a $2 win ticket on the board below).

The grounds of Churchill Downs are definitely still beautifully kept. This continues to be a thriving track, and races were scheduled for the evening of my visit. 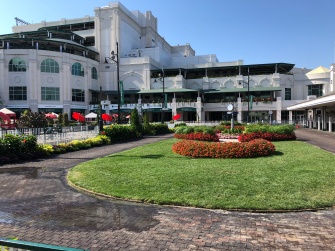 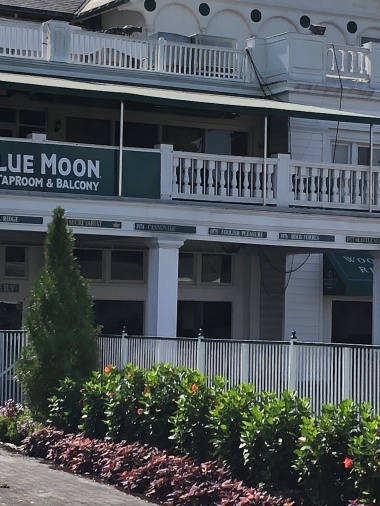 One of the reasons for this is that the Derby is still a significant social event in Louisville.  The hats, the balls, the mint juleps–all have a life of their own.   The museum included a display of absolutely fabulous Derby headgear that made me want to make my own. 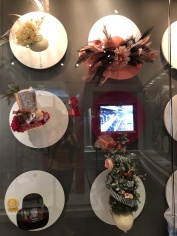 Secretariat had his own display of memorabilia.

The beloved Derby winner Barbaro, who broke his leg at the start of the Preakness, but battled back to health only to lose his life to laminitis the year later, is buried in front of the entrance to the museum and the grandstand.

Each of the Triple Crown winners received their own display.  Here’s Affirmed.

The museum has a large display around the various aspects of the sport, including the jockey’s display (including the racing silks that can be tried on), another on trainers, one on equipment, and one on horse breeding.  A centrepiece of the museum is a theatre with a 360-degree movie about Derby Day.  There are also lots of trophies, gear, and other such relics, both from the Derby and from the other Triple Crown races.  The blanket of lilies is from the Kentucky Oaks, the sister race of the Derby for 3-year-old fillies run the Friday before–“Lilies for the fillies.”  The finish pole pictured below was the one in place for both Secretariats and Affirmed’s victories. 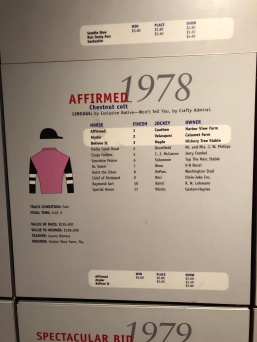 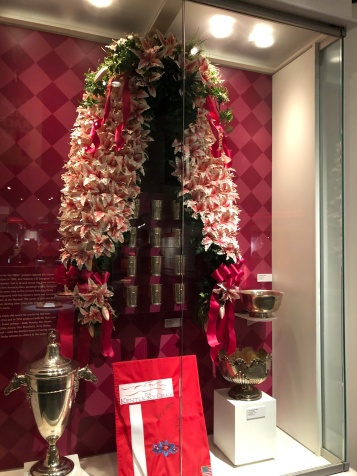 This short trip through Kentucky was the second in just a couple of weeks that, in part, duplicated a childhood vacation of mine.  Unlike Montreal, however, which has massively changed, Churchill Downs seems much the same as it was in 1979 (with the one addition of the Derby museum). If you look at the two pictures of the twin spires of the stands at the top of this post, what is immediately noticeable is that, with the exception of the addition of lighting, they look almost identical–only the year of the most recent Derby has changed.  Some things are clearly timeless. 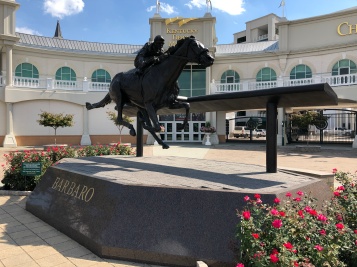